Blogs » University vs Apprenticeships: Apprentices talk about why they chose on-the-job learning 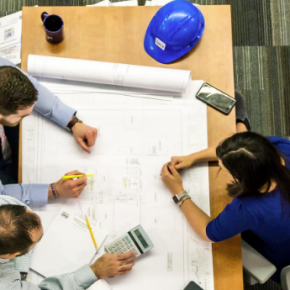 University vs Apprenticeships: Apprentices talk about why they chose on-the-job learning

With National Apprenticeship Week taking place from 4 – 8 March, here are the thoughts of two young apprentices at Seymour Civil Engineering, who have taken a different direction and are now thriving in their chosen field of civil engineering.

They stress the benefits of apprenticeships such as on-the-job experience, earning a good wage, avoiding debt and the potential to clinch a long-term role – all while gaining all-important academic qualifications too.

“A lot of my mates were saying that by doing an apprenticeship you get the same sort of outcome as you do at university but your course is paid for, you’re paid, you’re well looked after by your employer and you get your foot in the door of a career.

“Lots of my family have a background in construction, like my dad who is a bricklayer – so I thought I might look into civils and engineering in general and see where I can go with it.

“But I had no clue as to what engineering involved before I went into it.

“I’ve still got friends who are doing A-Levels and at the time I was thinking ‘which route do I want to go down?’

“But that was my fall-back option if I didn’t get an apprenticeship.

“I applied for a number of companies. Seymour said ‘do you want to come for a testing day?’ which included Maths, English and a few practical tests.

“I was invited to two further interviews and from there they offered me the job. I was 16.

“My family were over the moon that I had the courage to go for an interview at the age of 16 and get a job straight after school in the form of an apprenticeship – earning while I’m learning.

“The payment of an apprenticeship was definitely a draw too – it means as well as working hard I can afford to do things socially in my spare time.

“I have friends who are doing A-Levels messaging me to ask if there were any apprenticeships going! I feel as though I did make a good decision. It was hard at the time making it, but I feel as though it’s really paid off.

“I feel like I’ve really grown up – especially considering what you’re like at school with your friends. All of a sudden you’re in a work environment. I feel I’m more mature and grown up.

“I think any snobbery is carried over from years ago and people have got a perception that apprenticeships are more manual and labour intensive, but actually apprentices can be working in offices and things have changed.

“The debt that you can incur by going to university was also a big put off for me. I don’t want to be in that situation.

“I think people my age understand that apprenticeships are great but you’ve got your mum and dad in your ear saying university is more academic.

“My mum wasn’t really keen on apprenticeships at first and didn’t know much about them. But I think my mum is buzzing with it now – she’s really happy with the decision that I have made.

“Traditionally, people once thought that earning capability could be higher if you did go to university but now I think it could be about the same in most sectors.

“Another thing to take into consideration is if after university there is a job there waiting for you. With an apprenticeship the job is there from the start.

“My favourite bits so far have been being going out on-site and getting first-hand experience – when you read it online or in a book it’s harder to understand.

“I also like that Seymour has let us try every department – so I have worked in most departments such as estimating and quantity surveying which I think is the route I want to take.

“As a trainee Quantity Surveyor I have to keep to the estimated costs of a project, price any changes to the works that weren’t priced originally and just make sure that the project runs smoothly on the financial side.

“Would I recommend an apprenticeship to my peers? Definitely.”

“My sister Kensey, 20, went into an apprenticeship when she left school as a lab technician. I just knew that was the route that I wanted to follow too. It just seemed more interesting than sitting in a classroom all week.

“My mum was really happy with the decision and she thought that I would get a better understanding of the industry that I wanted to work in – and better still that I had a job as well.

“It was more when my sister did it that friends and family thought ‘that’s different’. The perception had been you go to college, you go to uni and then you get a job.

“Now the majority of my friends have apprenticeships too. One is an accountant, one works at Caterpillar, one works at a hairdressers. I think now it’s actually the more desirable route.

“I think the main attraction for me is that you’re getting paid but you’re learning as well.

“I do have friends who have gone to uni – and I know they enjoy it – but they are always worrying about money.

“You can get the education by doing an apprenticeship – I’m doing an HNC which means that if I did want to go on and do a degree that I could progress on for another year to turn my HNC into a degree.

“I was initially attracted to civil engineering after going to an open evening at Hartlepool College of Further Education and talking to the course tutor.

“When you think of construction you just think of bricklaying and being on-site but you don’t really think of the office-based jobs.

“When the tutor explained Quantity Surveying it really interested me.

“I want to be a Quantity Surveyor and I feel I will be in a good position to achieve this as I will have the actual on-the-job experience, which you can often miss out on at university.

“I feel like if I went to college full time I would definitely not learn as much, particularly about different sectors of the industry.

“I definitely feel the apprenticeship experience has helped me to mature.

“When you get a job you have to learn fast and grow up fast. But saying that, it is still a laugh coming into work – it’s not all serious!

“If you do apply for different jobs then you have the hands on experience as well as learning about it at college. I feel like it makes you stand out.”