Blogs » What action should be taken to stop woodworm? 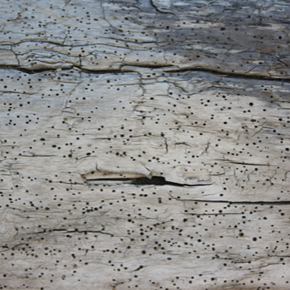 What action should be taken to stop woodworm?

Robert Owen of Timberwise discusses the problems that are associated with a woodworm infestation along with ways of treating the problems.

Woodworm is a term describing all wood boring insects that attack wood and timber and in turn, can cause structural damage if left untreated. Woodworm are attacking timber in properties in the UK right now and the amount of homes being treated for woodworm is now at around 5,000 per week.

The signs of a Woodworm Infestation

It’s important that all woodworm infestations are correctly diagnosed so that the correct method of treatment can be specified. The main types of wood boring beetle are:

One of the tell tale signs of an infestation are the small, round exit holes. Theses holes in the wood or timber can be in between 2 and 5mm in diameter dependent on the species.

Another way of identifying the type of woodworm is via the presence of bore dust or to give it its technical name, frass.

Frass is essentially the waste product created by woodworm when boring in timber. Frass is light in colour and varies in characteristics dependent on the species that has created it.

The Process of Removing Woodworm

Just like there are many various types of woodworm to look out for, there are a number of ways of removing the woodworm from the property. When a technician enters the infected area there are certain stages of preparation that are completed before the treatment is carried out. This involves:

Once the technician is happy to proceed they begin to treat the infected timbers using insecticide treatments sprayed directly onto the timber. The solution is then absorbed into the timber over approximately one hour where the eggs near the surface are killed off.

During the woodworm lifecycle the treated timber will be absorbed and once they emerge as adult beetles from the pupal chamber, the beetles will become infertile stopping any future infestations becoming established.

The insecticide treatments used are designed to reduce the risks of exposure to people, pets and the environment. Seriously affected timbers are usually cut away and renewed, where required structurally. Alternatively, resin repair techniques might be deployed.

By the very nature and living habits of a woodworm, they are unpreventable, although there are a couple of useful tips that can help keep these pests at bay.

One useful tip to take into account is that wood boring weevils are mainly attracted to damp and moist timber. So it’s important that your property is kept dry and fully protected from dampness so the woodworm are not attracted to the timber. Another tip is to make sure that all affected wood is removed and replaced to avoid the woodworm spreading.

When dealing with a severe house destroying insect such as woodworm it’s always best to seek specialist advice. Identifying the nature and severity of the issue is your first priority; in doing so will allow you to take appropriate steps to eradicate the problem.