Blogs » Why use a thermal imaging camera when renovating a home? 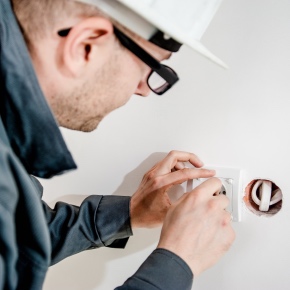 Why use a thermal imaging camera when renovating a home?

Renovating a home is an exciting prospect to refurbish anything starting to look dated and breathe new life into your property. During your renovation project it also provides you the ideal chance to inspect your house for any structural defects and to get them fixed before they are able to become more serious.

In some cases, these defects in the structure cannot be seen by eye and for this, to detect these problems that are not visible, a thermal imaging camera is used.

One of the primary reasons why a thermal imaging camera is highly popular within the construction industry is that they provide a safer non-invasive solution for analysing the structural integrity of a building. When undertaking inspections on areas such as behind walls, floors or ceilings, no damage will be made as they no longer require to be opened-up.

A highly portable device, that can be used to analyse the inside and outside of your house, a thermal imaging camera is an infrared equipment that works by translating thermal energy into light and from this an image is produced. This image is called a thermogram which reveals the temperature profile on the area analysed which allows you to see if there is anything irregular. This is particularly valuable for checking the electricals of a house.

For many, the electricals in a house are not always easily reachable, such as being above the ceilings or under the floorboards. By using a thermal imaging camera when inspecting electricals you will be able to seek out any hot spots. These hot spots will tell you that there is a presence of excessive current flows which could mean abnormal heating, a common root cause of electrical system failures.

Another valuable reason to use a thermal imaging camera is its effectiveness in discovering any air leakage in your home, and by repairing this it also has the potential to save you money. It will show you where there are temperature variations in the structure and reveal where heat is escaping, thus allowing you to resolve areas requiring additional insulation. Such areas you may find requiring attention are features commonly revamped during a home renovation such as windows and doors. These may be poorly sealed and by fixing these, will help reduce energy consumption due to the air leakage. Going forward, by having a house that is more energy efficient will in turn help for making savings in energy bills.

Finding air leakages in your home will also help in avoiding issues such as mould and dampness. Air leakage and water leaks which also may not be visible, such as being behind a wall, can be found by thermal imaging cameras because by rising the temperature of the area of attention, damp surfaces are seen because their temperatures will change at a slower rate than dry surfaces. It is important that these leakages are discovered because finding these early and repairing them will avoid the requirement of expensive repairs when moisture damage has reached its latter stages which is a prevalent reason for structural damage.

These examples show the value of using thermal imaging cameras during your home renovation, with their capability to identify potential larger issues earlier and resolving them means there is reduced risk of them becoming a more costly repair in the future.