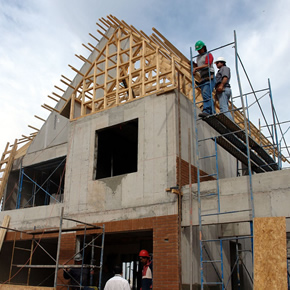 Guest Blog by Sam Prusek of The Industry Post

House prices rising, under a conservative government, are a close third behind death and taxes. Will the new Affordable housing starter home initiative change the status quo? It seems unlikely.

The Conservatives hope that the new scheme will help both new buyers and developers. The previous initiative of the ‘right to buy’ saw councils sell off more homes than ever and house prices continue to rise to the point that the need for affordable housing is now as big as it ever was.

The new regulations allow builders to take advantage of new, easier negotiations as restrictions on the designs of the house are loosened so that the house price can be decreased by twenty per cent. The scheme sounds good for developers. It is believed that the deal is sufficient to increase the building speed of plots that are already in the pipeline causing a short time increase in availability of houses.

However, it is believed to be unlikely that it will cause developers to want to build more houses. The issue for developers is that the housing market is unpredictable. The old saying of ‘Why fix something that isn’t broken?’ comes to mind in that developers are making good profits so why should they flood the market with new houses and risk changing their margins.

Mortgage rates are causing homes to be cheap to own. This is because the annual cost of repaying a mortgage is very affordable. The average repayment is less than twenty per cent of the first time buyer’s annual income. Thus owning a property and paying a mortgage is more affordable and sustainable than renting as the cost of renting is just under 35% of a renter’s average income.

If it is more sustainable to pay a mortgage than rent then why isn’t there an increase in new buyers? The answer is simple. The vast majority of first time buyers don’t have the 5% of the value of the house required to be accepted to buy a mortgage. This is because of the high house prices. High house prices are essentially pricing first time buyers out of mortgages as the initial one thousand pound deposit required for two thousand pound house is too big for families on the living wage to save up.

The new ‘affordable’ houses have been shown by Shelter, the housing charity, to out price nearly sixty per cent of families on average earnings. An even scarier statistic is that families who will be living off Osborne’s new ‘national living wage’ will be priced out in 98% of the country. It seems that less and less people will become homeowners. This is good for landlords as the number of renters will only increase which will in turn cause the rental prices to increase.

If you have money then property will be the way to make more money. Even with the new regulations it seems unlikely that there will be an increase in new home owners as the only people who will be able to afford to buy new houses are private renters.