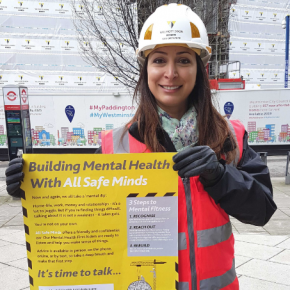 When Willmott Dixon launched its All Safe Minds campaign in 2017 to highlight mental health issues predominantly affecting young men in the construction sector, it did so in the face of stark statistics.

A year on, Willmott Dixon has taken its campaign one step further by training over 130 people – a fifth of its workforce – to become mental health first aiders.

Mark French, head of health, safety and environment at the company, explains.

The mental health and suicide rates of young men in the UK hasn’t been far from the news agenda in recent months, and within the construction sector, figures around the issue make for even more uncomfortable reading.

Statistics show that deaths from suicide are around ten times higher than deaths from injury in the construction industry, and that suicide rates amongst low-skilled male trades are 3.7 times the national average.

With these figures in mind, it was clear to us all at Willmott Dixon that, as well as raising awareness around mental health, we needed to implement practical measures that would make a tangible difference. As a result, we officially launched our mental health first aider (MHFA) initiative earlier this year.

About the MHFA initiative

To date, over a fifth of our workforce has been professionally trained to offer support to their colleagues at Willmott Dixon in a purely voluntary capacity.

The idea behind the scheme is to provide our workforce with a readily-available and qualified “MHFA army” that will help anyone personally struggling – or concerned about a colleague – to take that first crucial step towards getting help.

And they have had no shortage of volunteers for the role. For one MHFA, Melanie Abrook, it has offered the opportunity to tackle an industry-wide problem, as she explained:

“I think that it’s a really valuable thing and I endorse it and promote it wherever I can. It’s especially important from the statistical perspective where we know that construction is a male-dominated industry with a high suicide rate.

“I want to be able to help to break down the barriers and encourage those people who are struggling to be able to talk and deal with their issues.” 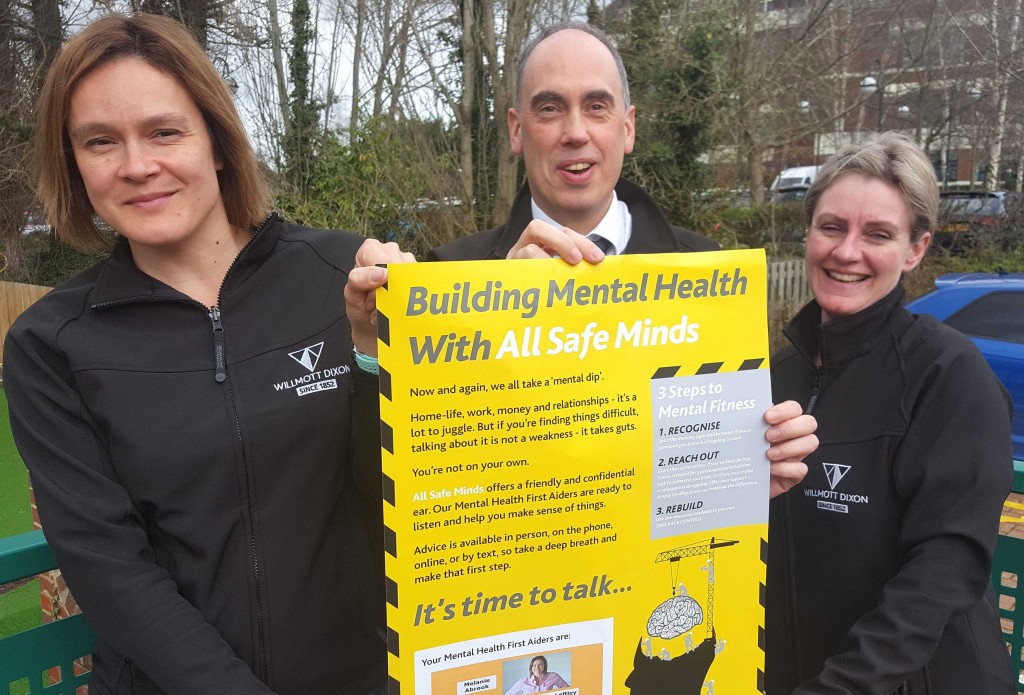 “As the scheme has progressed and been promoted more and more within the company, there’s definitely been an increase in people coming forward. This is often in a casual way in the first instance, saying things like ‘have you got a minute to talk’ or ‘I’ve noticed that Joe Bloggs seems a bit down at the moment.’

“The MHFAs being embedded in existing and familiar company roles has really helped to normalise the topic and make mental health issues easier to talk about as part of our company culture.

“Once we know that someone’s having a tough time, our MHFAs have an initial conversation with them, provide a non-judgemental listening ear and work with them to identify the best next steps for help.

“This might be through Willmott Dixon’s Employee Assistance Programme, external helplines like MIND or medical help via their GP. We can also tap into resources such as the Citizens Advice Bureau.

“For us, it’s really important that all of our workforce know exactly who their closest MHFA colleagues are and where we can be reached, so campaign posters are displayed around Willmott Dixon sites and offices to clearly identify those of us who are trained to provide support.”

This constant promotion and reinforcement is crucial to the success of the scheme, as another of Willmott Dixon’s MHFA colleagues, Kay Ortatepe, commented on:

“We’re really shouting loud and proud that, as a company, we want people to come and talk to us. We’re getting rid of the stigma surrounding mental health problems and changing perceptions internally so that people understand that any of us, at any time, can suffer from poor mental health.”

Initial results and the future

There’s no doubt that there’s a welcome change in culture taking place across the construction industry in general.

At Willmott Dixon we’re committed to working with other stakeholders in our sector to build a heathier, safer industry and our MHFA initiative and All Safe Minds campaign are a valuable first step.

Despite the relatively new introduction of the MHFA initiative, we’re already seeing and hearing positive things and have been encouraged by the response of both our MHFA volunteers in stepping forward to help their colleagues, and the proactivity of those seeking help to deal with their own mental health issues, or those asking for help on behalf of their peers.

“It’s a great idea which is making a real difference in an industry where historically, the demographic hasn’t talked about their problems.

“By encouraging people going through tough times to open up, we’re removing the stigma and talking about mental health proactively but sensitively.

“I’m looking forward to a natural progression where we’ll see as many mental health first aiders in our workplace as traditional first aiders.”

MHFA Melanie Abrook, concluded: “We spend a lot of time in the workplace, and are expected to be high-performing and meet multiple targets. We’re paid accordingly, but these factors don’t always correspond with the pressures of life we all face.

“The MHFAs have been really well received and the scheme has given us the opportunity to reinforce the fact that we shouldn’t be so hard on ourselves, that it’s ok for everything not to be ok all of the time, and to all watch out for each other’s wellbeing.”

In time, Willmott Dixon will endeavour to evaluate the success of the MHFA initiative against factors such as mental-health-related absences within the company but, for now, the focus is on continuing to raise awareness and encouraging its vulnerable colleagues to make that brave first step and acknowledge that they need help.

For more info and a list of support resources, visit www.willmottdixon.co.uk/how-we-do-it/all-safe-minds