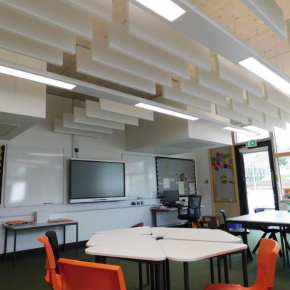 The £8m project at Ivydale Primary School involved the construction of a new two-storey building to double the school’s capacity.

A key element of the project was to provide a healthy learning environment, which meant it was crucial to provide good indoor air quality and thermal comfort within the school.

To achieve this, Breathing Buildings’ e-stack units were specified and installed to naturally ventilate the school.

As part of the ventilation strategy at the Ivydale Primary School project, a pair of Breathing Buildings’ e-stack A-500 units were installed in each of the eight ground-floor class rooms, while thirteen actuated louvre-damper units were installed at a high-level in the atrium.

This allowed an atrium cross-ventilation strategy in the ground floor class rooms, which did not have direct access to the roof. 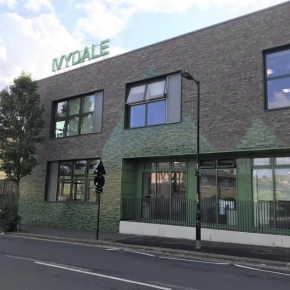 Plus, this had the added benefit of providing ventilation to the atrium so it could be used as an additional social/breakout space.

Meanwhile, on the first floor the eight class rooms, which benefit from good access to the rooftop, are ventilated directly through the roof using eight Breathing Buildings’ e-Stack R-Series units with Mushroom roof terminals.

All the ventilation is then controlled via a bespoke control panel, also provided by Breathing Buildings.

The Breathing Buildings e-stack A500 unit is an assisted atrium system. By providing a flow path through the building, it also aids the adoption of a natural ventilation strategy for the surrounding rooms.

The innovative low-energy system can be deployed in buildings with one storey where rooms are connected to a central atrium as well as multi-storey buildings.

In winter, high level vents or windows in the atrium are used to bring fresh cold air into the building as well to exhaust the warm stale air.

The air mixes naturally in the atrium and the e-stack A500 units then exchange air between the atrium and adjacent occupied rooms. In summer air enters through exterior windows in each room before flowing into the atrium through A-Series transfer units. The air rises within the atrium and exits through high level vents at the top of the space.

Meanwhile, the Breathing Buildings e-stack R-Series system is designed for rooms which have direct access to the exterior via the roof. The system is ideally suited to school classrooms, or small-to-medium sized office spaces, with occupancy levels in the range of 10 to 40 persons.

In summer, opening windows brings fresh air directly onto occupants and the R-Series unit with its roof terminal acts as a high-level exhaust vent.

In winter, a mixing ventilation strategy operates – this eliminates cold draughts without the use of preheating radiators/heating batteries and hence has major energy saving benefits.

By using this patented e-stack strategy, incidental heat gains which arise in the room are used for heating the incoming air during cooler weather, reducing the need for radiators or heater coils that are often used in conventional natural ventilation systems.

The heat gains in heavily occupied spaces (e.g. school classrooms) are sufficiently large that heating is not needed until the external air temperature falls below – 7°C.

Breathing Buildings is committed to excellence in school ventilation design and has launched a new sector-specific brochure titled ‘Ventilation for Schools’ which can be downloaded here.