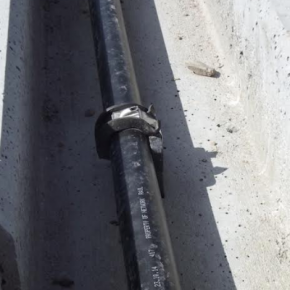 Ander-fin was supplied to the Network Rail project, which is being overseen by Balfour Beatty, as cable theft was deemed a big risk in the area.

The company’s Anderlite Troughing and Ander-Loc products were also installed to further lower the likelihood of cable theft.

Ander-fin is made from glass filled nylon, with a failure load of over 2kN.

Easy to install, it allows cables to be secured to troughs every metre in high risk areas.

Steve Snell, Project Engineer for Balfour Beatty, said Ander-fin was chosen because it is quick and easy to install, offering a unique, cost effective method to prevent cable theft.

“Given the high cost of cable theft and the risk to life, I would like to see this product installed on all major schemes going forward,” he said.

He added that it was deemed a great success with Network Rail and he thinks they will wish to use it in the future.

Sharon Rice, Rail Manager at Anderton Concrete, described Ander-fin as a ‘revolutionary cable anchoring system, designed to tension and secure the cable to the trough, preventing its removal.’