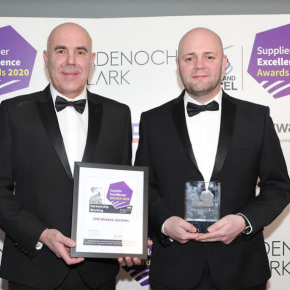 CMS Window Systems has been recognised for its supreme delivery of public sector window and door contracts, by scooping a top award in the prestigious Scotland Excel Supplier Excellence Awards 2020.

Winning the ‘SME award’ in the Partnership Working category is set to strengthen CMS’ position as one of the leading window, door and curtain walling designers, manufacturers and installers in Scotland, and recognises the company as one the very best suppliers to Scotland’s public sectors as a whole.

CMS has been awarded onto Scotland Excel’s framework for replacement windows and doors since 2017, providing the public sector with sustainable solutions with assured quality and service for refurbishment and new build projects.

In winning the Partnership Working award, CMS has successfully demonstrated how its approach to contracts mirrors the ethos of Scotland Excel, who believe that partnerships can create mutually beneficial relationships between the public sector and suppliers to deliver better services and outcomes.

“It’s fantastic to win such as highly respected award so I’d like to say a big thank you to Scotland Excel for recognising our efforts,” he said.

“Since our inception in 2006, we have been focused on providing public sector clients with an added value service that enables them to partner confidently with a socially and environmentally sustainable supplier who is dedicated to improving not only the bricks and mortar that they manage, but communities as a whole.”

This latest accolade marks an incredible past 12 months for CMS, which has won a string of awards in recent months, including two G19 Awards and the Best of VIBES Award, for its contribution to excellence in environmental performance.

The company is also currently in the running for a major UK-wide industry award, as a finalist in the Construction News Specialists Award, the winners of which will be announced at the end of March.