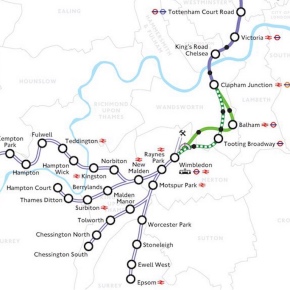 Construction bosses including Ray O’Rourke (Laing O’Rourke), Julian Gatward (Taylor Woodrow) and David Whittleton (Arup) have signed a letter addressed to the chancellor of the exchequer Philip Hammond, making a case to continue funding the development of the Crossrail 2 project.

The government has thus far provided funding for the planning stages of the £32 billion infrastructure project, which would connect National Rail networks in Surry and Hertfordshire, providing a new rail link across London on the Crossrail network.

The letter to Philip Hammond described Crossrail as ‘an infrastructure project of national importance’ and concluded: “We need to get people to work. Now is the moment for government to find the parliamentary time and show the world UK is open for business post Brexit.”

The letter has also received backing from the bosses of Heathrow and Gatwick airports, as well as Ramboll UK’s Matthew Riley and Alasdair Reisner, the chief executive of the Civil Engineering Contractors Association.

The mayor of London, Sadiq Khan, has similarly urged the government to get behind Crossrail 2, having previously expressed disappointment after the project was not mentioned in the Spring Budget. He commented:

“This is yet more evidence of just how important Crossrail 2 is to the UK. Despite the project benefiting the whole of the UK, London has actually met half the funding cost. What we now need is for the government to take note of these benefits and give us the green light to progress, for the good of the entire country.”

The secretary of state for transport, Chris Grayling, will make a decision in the spring on whether the project will receive more funding.

Transport for London (TfL) recently submitted an updated business case and funding plan which stated that the project could allow an additional 270,000 more people to enter central London every morning at peak time.

The Crossrail 2 website claims that the project would support the regeneration and development of up to 200,000 new homes across London and the South East. It also predicts that the development would create 60,000 new jobs across the supply chain whilst under construction and an extra 200,000 jobs across the area once operational, adding up to £102 billion to the UK economy.

Read the full letter below:

Today, we urge Government to enable rapid progress towards the construction of Crossrail 2, an infrastructure project of national importance.

Crossrail 2 will make a difference to the whole country. Forty per cent of transport benefits will be outside London. Thirty per cent of the housing will be outside of London. Sixty thousand supply chain jobs and apprenticeships will be created across the UK. It will grow the national economy by up to £150 billion. London is already committed to meeting half the cost.

This will ease overcrowding on key rail lines from Portsmouth to Cambridge and will link with High Speed 2 (HS2) at Euston. This will transform journey times and connectivity from the Solent to the Wash, supporting 200,000 new homes and 200,000 jobs.

An already overcrowded regional transport network struggles to get people to work and fails to link them to accessible housing, threatening to stunt growth across the entire nation. Serious bottlenecks at nationally significant stations like Clapham Junction and Waterloo are already intolerable and, without Crossrail 2, the journey time benefits from HS2 will be lost in queueing at Euston.

We need to get people to work. Now is the moment for Government to find the Parliamentary time and show the world UK is open for business post Brexit.