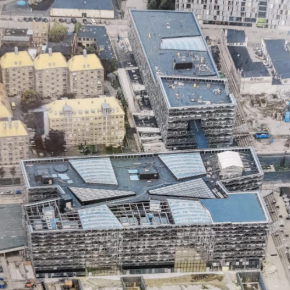 Bull Products is continuing its expansion into Europe, after securing a major contract in Denmark, specifically at the University of Copenhagen.

Working alongside distributor, Lindpro, the Cygnus Wireless Alarm System has been installed in Niels Bohr Building, a new science institute which is part of the university.

It consists of two separate buildings on either side of one of the busiest roads into the centre of Copenhagen. The buildings are connected by an underground pedestrian tunnel, which needed extensive relaying of pipelines (steam, district heating, drainage/sewerage, 10 kV control cables and gas) on both sides of the thoroughfare/road.

Over 140 Cygnus units have been installed across both sites that are all on one system, which is split into 14 zones.

Despite the site being split into two by the main road, the system’s reliable meshing protocol ensures there is no issue with communication, with a Cygnus call point even featuring in the underground tunnel that connects the buildings.

Additionally, mobile dectection devices have been installed and can be relocated around the site as and when is necessary, with no need for tools and equipment.

Bradley Markham, director at Bull Products, commented: “The Niels Bohr Building required an alarm system that would work underground and have the capability to connect the system through two buildings, without compromising on connectivity or signal strength.

“We’re delighted to be protecting complex buildings with our alarm system and we’re looking forward to strengthening our presence in Europe further.”

Peter Buch Christensen, project manager, at Lindpro, added: “The site required a system that would detect water due to flooding earlier on in the construction site.

“The new developed water detector will link with the Cygnus Alarm System via the Cygnus Interface Unit, thus saving us time and money in the long run, whilst ensuring our site is protected from all the harsh elements.”