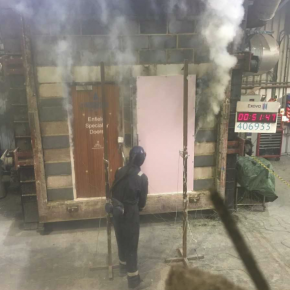 It was directed to do so by the independent Expert Panel, appointed in the wake of the Grenfell disaster, when it was learned that some composite Fire Doors failed the test, with some lasting significantly less than 30 minutes.

Complete timber doorsets were tested to British Standard BS-476:223 in a UKAS accredited test house, with doors opening both away from and into the fire, which was a particular concern after Grenfell.

All of the doors in the test passed the 30-minute standard, leading the Expert Panel to conclude: ‘timber Fire Doors perform consistently when tested’.

Enfield Speciality Doors provided the MHCLG with technical advice, design and fire protection expertise and Enfield’s ESD-FD30 PAS24 door was one of the first to be tested.

It resisted the fire for 35 minutes facing into the furnace and 51 minutes facing away – particularly impressive when you consider Enfield’s doorsets came complete with a PAS24 Security Rating and a 3-point locking system.

Nigel Sill, Chairman of Enfield Speciality Doors, commented: “We were pleased to have been approached and we welcomed the factory visit by MHCLG to brief them on fire doors and show them how Fire Doors are manufactured.

“We confidently supplied doorsets typically used in front entrance applications that require both fire and security performance, despite the 3-point lock having some large metal components that can prove a challenge when fire testing.”

The firm was particularly pleased the test confirmed that Enfield Fire Doors come with a considerable safety margin.

Nigel added: “We deliberately over-engineer our doors to give extra safety time built-in to every door because things don’t always go to plan in an emergency.

“When people need to leave a building safely and fire fighters need to get in and out safely, an additional safety margin can make all the difference.

“When the performance of other materials has been questioned, this endorsement of timber Fire Doors will reassure specifiers, property managers, and contractors.”