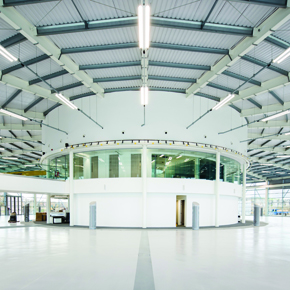 It will be the UK’s first fully reconfigurable assembly and component manufacturing facility for collaborative research, capable of rapidly switching production between different, high-value components and one-off parts. ABC+D takes a look…

Bond Bryan Architects has long become an industry expert in designing and delivering Advanced Manufacturing Research Centres (AMRC) nationally, so when the firm won this project in the summer of 2013, the brief and dream was to design a circular factory; a concept first created for the AMRC in 2005, but not achievable at that time due to budget and programme restraints. 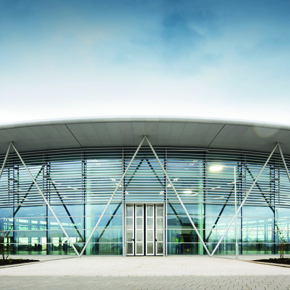 “This is a special moment for me personally, seeing a visionary building developed in my mind’s eye over ten years now become a reality…” – Darren Southgate

Bond Bryan proved that re-configurability and flexibility do not need to rely on traditional building form and layout. This project creatively demonstrates how form is no longer an inhibitor to the functionality of an advanced manufacturing environment.

Principal designer and director at Bond Bryan, Darren Southgate commented: ”This is a special moment for me personally, seeing a visionary building developed in my mind’s eye over ten years now become a reality. The idea of linking the core visually, without walls and being part of the workspace donut were always leading design principles.

It is a human need to be associated or close to activities that link thinking and doing; the days of disappearing into cellular offices away from the production environment have been replaced by hands-on doing and reporting – them and us is no longer. The need for quiet space hasn’t gone but it is shared through multifunctional, collaborative spaces.”

With its fully-glazed elevations and circular plan, the building features a core of open-plan working, meeting rooms, lifts and stairs at its heart. Clever design elements include single staircase access from the core accommodation with under-workshop floor tunnel egress, removing the need for an awkward second staircase and providing 100% uninterrupted research floor space.

The mechanical and electrical installation is centralised in the core with perimeter-trenched services to get vital air, water, power and data to machines. Carefully co-ordinated services around the building, mostly hidden from view under covers, mean the space will feel uncluttered – a design prerequisite.

The 360°, 8m high glazed external elevation is free spanning from ground to roof using a steel curtain walling system. Using 3x1m glazed modules, the façade develops a horizontal quality. The brise soleil around the top one third of the glazing reduces high-level glare and overheating; a system of circular profiles run perfectly around the perimeter supported off the curtain walling. Out board of the main façade is a unique V system of circular tubes to brace the principle structure in a very expressionistic way.

Andrew Fallon, head of estates development at the University of Sheffield, said of Bond Bryan Architects, “I was very impressed with its emphasis on aesthetics as well as sustainability with a design which meets the project brief but which also, in the spirit of excellence, exceeds my expectations.”

Find out more in the February issue of ABC+D Magazine