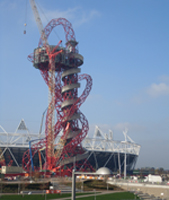 Fire safety measures for stadia across the UK

The ArcelorMittal Orbit Tower is one of the structures that has benefited from the implementation of fire safety measures. It is among the stadia that Wrightstyle has supplied its fire-resistant glazing systems to

The Bradford City disaster left over 250 fans and supporters of Bradford City and Lincoln City injured in addition to those who lost their lives.

It is suspected that the fire was caused by a cigarette or match being dropping into an empty area beneath one of the stands. The whole structure was immersed in flames almost immediately.

Following the disaster, the Popplewell Report introduced a new safety legislation for sports grounds across the UK.

Under the Regulatory Reform (Fire Safety) Order of 2005, football clubs must plan and implement preventative and protective fire safety measures.

The club must monitor, control and review their new safety measures and record the improvements it has made in writing.

Modern stadiums are built with concrete, steel and fire-rated glass to minimise the risks posed by fire.

However, Wrightstyle, has suggested that it is not enough for designers to build in passive and active fire systems; they must look at the stadium as a whole and assess its capacity to withstand a fire.

Regarding glazing, this means analysing the level of containment that the glass will provide.

The levels of containment are vital in a stadium as it can hold a large number of people that all may not follow evacuation procedures in the event of a fire.

Research has revealed that two-thirds of the time it takes people to evacuate a building after an alarm is spent looking for more information or searching for family members. Many people do not take the alarm seriously.

This suggests that evacuation models do not reflect the variable nature of human psychology.

Therefore, it is important that the design of stadiums must factor in a delayed evacuation response.

Glazing systems for fire doors, internal screens and the exterior envelope of stadiums are thus important. They can protect escape routes and give people more than enough time to evacuate.

Wrightstyle’s advanced glazing systems have been tested against both fire and smoke. They have been designed to provide up to 120 minutes of protection against the spread of fire, smoke and toxic gases.

The company has supplied to the London Olympic main stadium and the 115 metre high observation tower, ArcelorMittal Orbit, that is nearby.

Additionally, its glazing systems have been specified for installation at the Athens Olympics, FIFA, the Asian Games and the national FA facility at St George’s Park in Staffordshire.

To mark the 30th anniversary of the tragedy, there will be a service of civic remembrance. Other memorials, such as Bradford’s last game of the season again Barnsley, are scheduled to take place.

The memorials and fund raising events will be supported by the Football Association, the Premier League and the Football League.

All of the funds raised will go to the University of Bradford’s Plastic Surgery and Burns Research Unit (PSBRU). A minute’s silence will also be held at football grounds across the UK to remember those who were lost.