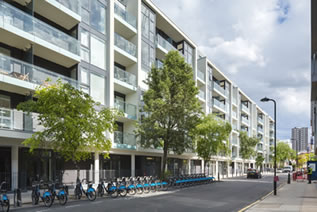 Based around the company’s SHEVTEC system, the solution fitted at the development utilises the building’s existing smoke shafts for natural ventilations, allowing for significant thermal performance improvements to be made along with major cost savings.

Permanently open louvres of 0.5 m2 at roof level and within the stairwell were used to utilise the automatic smoke dampers on each floor and provide vent heat into the smoke shaft, whilst smoke ventilation roof vents were also installed to automatically over-ride the natural system should a fire break out.

The smoke control systems ensure that the temperatures in communal areas and corridors are kept at a comfortable level for residents, with cooler air entering the building via the main doors and flowing across the lobby before being exhausted through the roof vents.

The lobby temperature is controlled by a tamper proof thermostat, with the majority of doors and smoke dampers closing automatically in the event of a fire to allow smoke to be drawn from the corridor and into the smoke shaft, allowing residents to escape smoke free through the escape route.

An NVLogiQ room controller is also incorporated into the system in the first floor lobby core to monitor and log its performance for further analysis and maintenance.