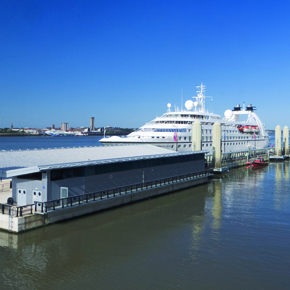 Statistics from the Met Office suggest that around 10% of Britain is at risk of flooding. 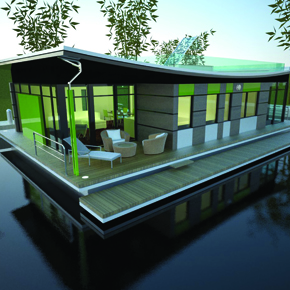 Floating infrastructures are not uncommon in Scandinavia, where many people live in floating houses

Climate change is causing an increase in flooding around the world. It is predicted that the average amount of rainfall will rise by 30% by 2080. Along with melting glaciers and rising sea levels, this increased rainfall is affecting the globe.

Water has engulfed entire islands: by submerging inhabited land, it is posing a threat to people’s lives. Engineers have relied on protective measures, such as the construction of dams and reservoirs, diversion channels and gabions, for many years.

However, these approaches can be costly and inefficient. Not only do these sorts of defences require constant maintenance, they are only a temporary solution to a permanent problem.

Floating infrastructures have been suggested as a solution. They can be units that sit on dry land and rise with water levels or structures that sit on permanent bodies of water.

The latter kind has been proposed at the Royal Victoria Docks in London.

With floating infrastructures, a whole town could feasibly be built on a flood plain. This would make use of land that could not have previously been used due to risk of flooding.

Floating structures could also be built where environmental regulations prevent traditional structures from being constructed.

For instance, since the construction of floating structures does not require drilling into seabeds, they can be built in places off the coast.

By building on water, the need to build on protected land is also reduced.

The company has also developed a corrosion-free reinforcement for concrete to improve the foundation design and life cycle of floating infrastructures.

The company has previously provided structural and engineering services for the floating cruise liner dock on Liverpool’s quayside, which was completed in 2007.

Find out more about Ramboll UK