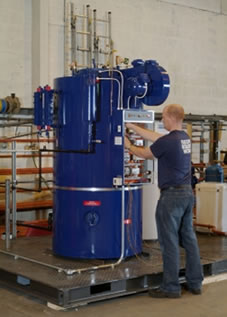 The hotel owner contacted heat transfer specialist, Fulton, in 2012 due to laundry bills amounting to nearly £80,000 a year due to the lack of a suitable electricity supply in force at the site.

The J Series installed is also used for the backup dryer and smaller roller ironer in the £200,000 laundry facility, which is used five days a week after securing contracts from local businesses including a golf club and hotel.

Hotel owner, Vaughan Williams, has signed an on-going servicing and maintenance contract with Fulton as part of a plan to maximise its boiler potential and the Tewin Bury Farm is on its way to maximising its five year investment plan.

Fultons J Series vertical gas and oil fired steam boiler range includes eight models with outputs from 96 to 960 kg/h, with the boilers robust construction making it ideal for application in a wide range of industries.

The boilers tubeless design eliminates the needs for the coils and tubes traditionally used in a steam raising plant, allowing the J Series to raise its full steam output in just 20 minutes.

All of the companys systems are designed to be delivered to site and installed on a prepared concrete base to offer high levels of efficiency and reliability.

Tewin Bury Farm is set in 700 acres of countryside and features a series of barns and 17th Century outbuildings converted to a bar, restaurant and bedrooms for residents, weddings and hospitality events.