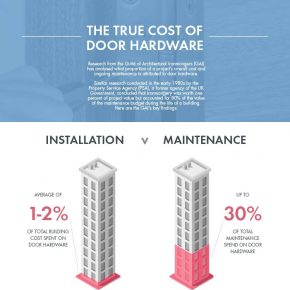 New research from the GAI shows some types of buildings can incur up to 19% of their total maintenance budget on architectural ironmongery, despite the average spend on this being between 1 – 2% of the value of a new-build.

The research from the Guild of Architectural Ironmongers has analysed what proportion of a project’s overall cost and ongoing maintenance is attributed to door hardware, such as handles, locks, hinges, door closers and other essential ironmongery.

Similar research conducted in the early 1980s by the Property Service Agency (PSA), a former agency of the UK Government, concluded ironmongery was worth 1% of project value, but accounted for four-fifths of the value of the maintenance budget.

The GAI research showed the average percentage of build cost attributed to ironmongery has increased, and has now put a figure on likely maintenance budgets too. 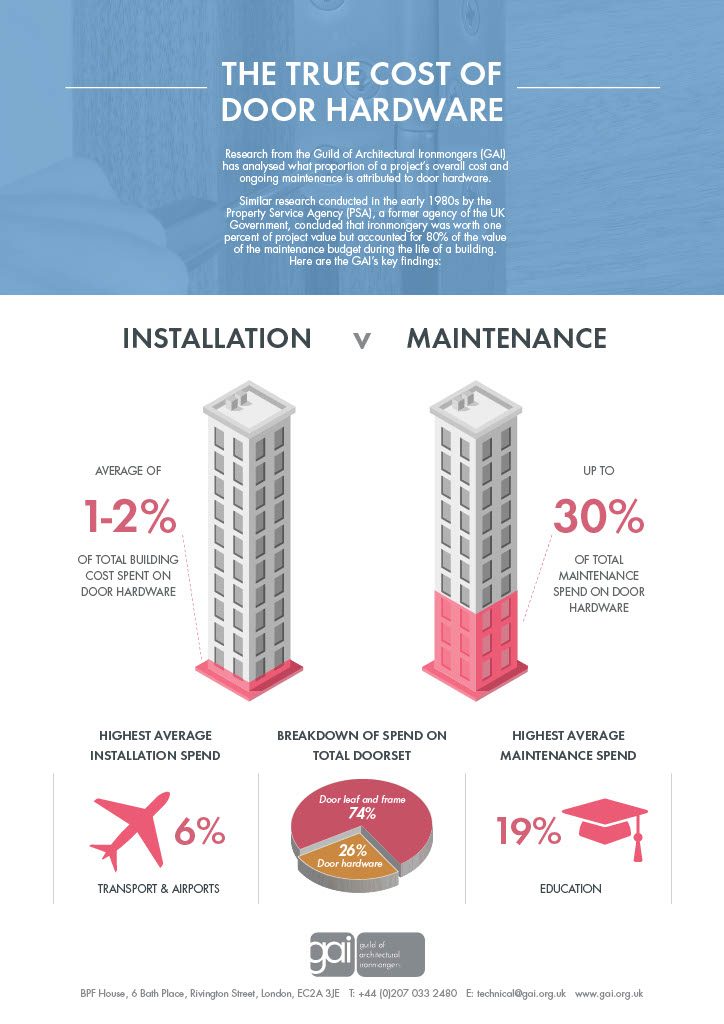 Douglas Masterson, technical manager of the GAI, commented: “As a proportion of a project’s value, the budget needed for specifying architectural ironmongery has increased over the last 40 years, most likely in response to increasingly robust standards for safety, accessibility and other improvements in the built environment, advances in technology such as access control products, and the quality of products themselves. The value can now be up to 5.84% of a project value, depending on the sector.

“Maintenance regimes have also moved on significantly since the 1980s. New building elements such as heating and ventilation systems, air conditioning systems and IT networks are now a higher percentage of annual maintenance costs.

“The demands of increased health and safety regulations and an increase to the UK minimum wage has also impacted on costs. Repairing or replacing door hardware can still be time consuming and now we also understand its budget implications too – for some building types such as educational establishments it can be as much as 30% per year.

“This research underlines the financial significance of making better choices about the architectural ironmongery in our buildings.

“When it comes to specifying products and asking for advice on routine maintenance, we would always suggest consulting with a Registered Architectural Ironmonger (RegAI).

“Fully trained and committed to keeping up to date with the latest product and industry knowledge, RegAIs will be able to assist with choosing the correct product for the application, the best practises for checking its ongoing performance, and the best options for any building owner’s budget.”

The research was conducted on behalf of the GAI by AMA Research. The research project increased its scope from the original PSA research to include private offices; public sector offices; retail; hotels; health; education and transport facilities such as airports and railway stations.

It also looked at both mechanical and electrical hardware to reflect current usage of architectural ironmongery in these types of buildings.

The first part used data from Barbour ABI, AMA Research’s own library of reports which was supplemented with a series of interviews with architectural ironmongers, manufacturers, distributors and installers of ironmongery.

The full research results are available for GAI and IAI members to download via the GAI website.