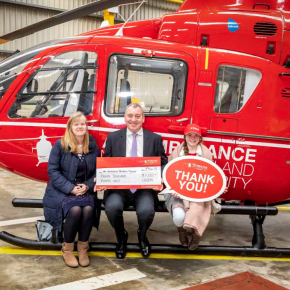 Held in Belfast, Geberit joined a host of companies at the Titanic Hotel for a night of fundraising at the Conference dinner and charity auction.

Lucas Vogan, Technical Sales Manager at Geberit and IHEEM committee member, had the privilege to hand over an £11,000 cheque, alongside his wife Joanne and daughter Grace.

Funds raised will go towards the running costs of the emergency helicopter service, which has rescued more than 500 people since its introduction last year.

The crew attends traumatic medical incidents 365 days a year across Northern Ireland and the border counties, providing critical pre-hospital care, both at the scene and whilst transferring patients to hospital.

Purdie Proudman, Channel Marketing Manager at Geberit, commented: “We’re aware of the incredible service the Air Ambulance provides to the region, not only to trauma victims but also their families.

“As such, we’re very grateful to have taken part in a fundraising event that has raised a significant contribution for such a worthy cause.”

The IHEEM conference looks at new advancements in healthcare technology and hears from industry experts on changing regulations and achieving best practice in the healthcare estates sector.