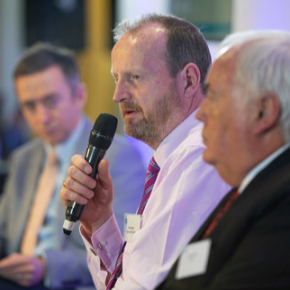 The Glass and Glazing Federation (GGF) annual Members’ Day conference held on 26 September at Hilton Olympia in Kensington was hailed a great success by GGF senior staff, Members and Board directors.

With a record number of Member companies in attendance, over 100 delegates witnessed presentations from four leading voices from the fenestration, construction, politics and energy sectors.

John Agnew, GGF President, welcomed all in attendance and opened the conference with GGF Annual General Meeting (AGM), at which all Members unanimously approved the 2018 accounts (which showed an increase of £278k in Members’ funds’) and also re-elected the Federation’s financial auditors and bankers.

The AGM was followed by an outline from John Agnew as he addressed the key areas where the GGF will focus its activities in the future and highlighted the Federation’s extremely strong position not just financially, but also as the trade body leading the way on the technical front and as the voice to Government, on major topics such as changes to building regulations, fire safety, skills and training and energy efficiency. 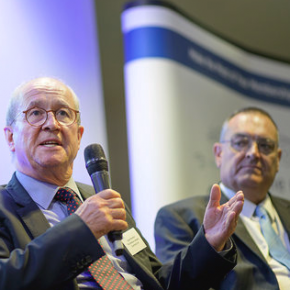 Without further ado, the proceedings moved on to the keynote presentations and a welcome to Kevin Schofield, Editor of Politics Home who shared his sharp insights on the uncertain world of today’s politics.

In his speech, Kevin (who’s covered politics at Westminster for 11 years) said he’d never known the House of Commons to be as toxic and divisive as it is at present.

After the event, Kevin commented: “I thoroughly enjoyed attending Members Day. It was a great experience and the contributions from the various speakers were very informative.”

The next presentation from Andrew Warren also proved to be insightful, as he highlighted the problems of Government addressing climate change and the need for greater energy efficiency in construction.

Andrew also raised the unfairness of the current rate of 20% vat on glass and glazing energy-saving products and on the installation of windows and doors as an energy-saving measure.

In his speech, he explained how the UK government has always said the VAT banding was a European Union decision and out of their hands, but pointed out that this will no longer be an excuse for the Government once the UK leaves the European Union.

On his experience of Members’ Day, Andrew commented: “I was delighted to have had the opportunity to present on the subject of energy efficiency to such an impressive gathering of many of the senior people involved in the glass and glazing industry. It also gave me a chance to really appreciate why this industry has been so successful for so long.”

Anda Gregory, MD, GGF Commercial, delivered an excellent update on the progress of the GGF’s subsidiary companies (FENSA, BFRC, GGFI, RISA and Borough IT) and gave an airing of the FENSA TV advert which has captured the interest of many in the industry, as well as tens of millions of homeowners in the UK. 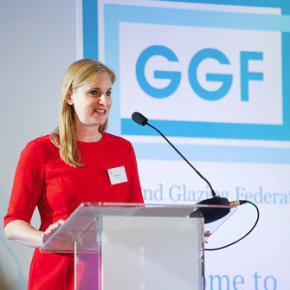 After Members’ Day, Anda shared her thoughts on the event: “It was a pleasure to speak at this year’s Members’ Day on the excellent progress that we’ve made with the GGF’s commercial businesses, presenting alongside fascinating speakers on a variety of topics of importance and interest to our members.

“I’m always struck by how fortunate we are to have such passionate and committed members of the trade federation.”

Fire safety and the imminent changes to building regulations were the next topics to be presented by Peter Capelhorn, Chief Executive of Constructions Products Association.

Peter superbly delivered a chronology of events leading up to the Government Inquiry into the Grenfell Tower fire tragedy and the subsequent Hackitt Review and Report.

In his presentation, Peter highlighted how all in the construction industry must brace themselves for real change in culture, responsibility and process as well as regulatory changes.

Peter commented: “It was a pleasure to take part in a very well organised and informative event. It’s good to see the GGF continuing to provide essential support for Members as it has done for many years.”

Following the presentations, Members of the GGF Board took to the stage to take questions directly from the membership.

All questions were answered openly and transparently and the general feeling was that the GGF is a great position to move on to even bigger and better things and with greater confidence and assurance than ever before.

Members of the panel praised the GGF staff for the outstanding services they have seamlessly delivered throughout the past few years of change.

On his role as Moderator, Kevin Schofield commented: “The open forum went very well and in particular I think GGF members enjoyed the opportunity to ask the Board members about the organisation’s plans for the future.”

After the forum, the day ended on a lighter note with two special awards. Firstly to RITEC International for their outstanding contribution to the industry.

John Agnew presented the award and in his speech mentioned that RITEC were the innovators and pioneers of glass surface modification with their ground-breaking non-stick liquid solution that protects glass surfaces and enables glass to clean itself.

RITEC’s founders and current owners, Stephen and Karen Byers went on stage to receive the accolade. On accepting the award Stephen was at first lost for words and could only say in his inimitable Texan accent; “Wow!”, before thanking the GGF for the award and for the support he has received from both the Federation and Members over the last three decades.

After RITEC’s award, it was the turn of the Flat Glass Manufacturer’s Association, which celebrates its 50th anniversary this year. The GGF recognised the FGMA for its outstanding service to the industry.

Michael Butterick, Chair of FGMA, commented: “It was a great surprise and much appreciated. I was happy to accept the award as the FGMA has supported and worked with the GGF since its foundation.”

Closing remarks for the day came from GGF Vice-President, Mark Austin, who will take on the mantle of the GGF Presidency in 2020.

Mark thanked the delegates for attending and the staff for organising a great event, however most importantly were two key announcements in his speech.

Firstly, Mark announced that the GGF will hold a new event called The Chairperson’s Forum, in London on 4th February 2020, to bring all the Chairs of GGF groups, committees, executives and Board members together to discuss all things GGF.

Secondly, Mark announced that on the late afternoon (3.30pm to 6.30pm) of the 4th February the GGF will hold the President’s Reception in London with all Members invited.

On summarising the day, John Agnew reflected: “It was a great event and good to see so many Members attend and network.

“It was also a productive day, with very informed and interesting speakers who provided invaluable insights into the key issues that are affecting our industry.”

Steve Rice, GGF Managing Director, added: “I was delighted that Members’ Day proved a great success. Our staff have worked hard to make sure it all ran smoothly and the Members who attended seemed very positive about the event.

“Personally, I felt it was one of our best Members’ Day conferences in years and my thanks go to the GGF staff and all who attended to make it such a memorable and enjoyable occasion.”