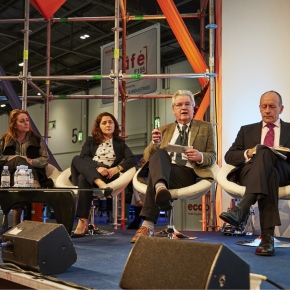 Affordable housing took centre stage at The Arena on day two of Ecobuild (8th March), as Ben Derbyshire, RIBA president-Elect, called for a building programme in the outer suburbs of London.

A significant amount of new homes would be built over a generation, should the proposed project go ahead, helping to deliver more affordable homes in the capital and therefore solving the ongoing housing crisis.

Ben Derbyshire explained that there is an average of 15 dwellings per hectare, which can be brought up to an average and over a generation would yield 700,000 new homes.

A panel of experts joined Derbyshire, including Jules Pipe, Deputy Mayor of Planning, Regeneration and Skills at Greater London Authority, and representatives from HTA Design, Savills, Taylor Wimpey and Transport for London.

Later that day, sustainable workplaces were also high on the agenda as Chief Executive of UK-GBC, Julie Hirigoyen lead a panel discussion around the increase in demand for health office spaces, emerging technologies, future working patterns and human-centres design.

Niall McLaughlin rounded up day two by sitting down with BBC Arts Broadcaster, Will Gompertz, for an open conversation around all the day’s discussions.

Regenration Drive was the central feature at this year’s show, which was once again packed with visitors, including those exploring the new Future Materials research innovations.

Crowds gathered at a host of seminar theatres with Green Infrastructure being one of the most popular. Speakers from the likes of the Landscape Institute, Arup and AECOM discussed issues around healthy places and the importance of green infrastructure in decision making.

The Sustainable Stand Awards was also presented, by Ecobuild in partnership with UK-GBC, to MEDITE SMARTPLY and the Modular & Portable Building Association.

Martin Hurn, managing director of Futurebuild, owners of Ecobuild, commented that there was a great atmosphere at day two of the show and said that exhibitors have continued to pull out all the stops too showcasing some of the leading innovations, solutions and initiatives in the sector.

Finally, day three is set to be equally action-packed with discussions on the implications of Brexit for UK construction, what’s next for retail and also discussions around whether autonomous electric cars are the future of urban transport.

Broadcaster Environment Analyst, Roger Harrabin, will host The Arena, and will be joined by experts from M&S, Waitrose, BSI and Federation of Master Builders.