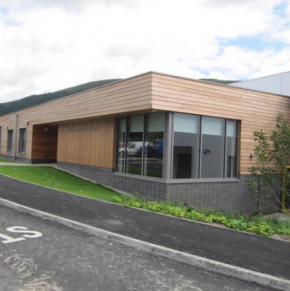 In September 2017, St Bronagh’s Primary School in Rostrevor, County Down, moved into their newly built premises, which features Hush Acoustics products throughout.

Designed by Donnelly O Neill Architects Ltd and built by Ganson Building & Civil engineering contractors Ltd, this £3.9 million school was crowned with the Sustainability award in May last year.

The former Convent of Mercy Primary School had to be demolished to make way for this new, seven classroom building, along with the construction of a new youth club building, sports hall, community and games room, and additional accommodation.

The school design itself consisted of seven ‘pods’, all of varying heights – reverberation within these areas was an acoustic concern.

For practical and aesthetic reasons, as well as meeting the required reverberation times, 286 Hush Absorbing Notice Boards were supplied in a neutral colour with a bespoke frame colour to ensure that they blended in with the existing décor.

In certain areas, Hush were asked to create a feature wall with the panels and so Hush Absorber 50 panels were used, which were provided in four vibrant colours to create both a statement to the chosen rooms, as well as meeting the required reverberation time.

Hush also provided three large printed 50mm panels at high level within the staffroom. These panels were printed with an image of the Cloughmore Stone as requested by the school.

The Cloughmore stone is significant to the area and is a giant 50 tonnes granite boulder that sits high above the village of Rostrevor.

As well as creating a tailored interior design, the sound absorbing panels provide a practical and efficient way of dampening sound reverberation and eliminating echoes within the rooms.

Hush worked closely with its stockists Commercial Connections in Crossgar, County Down to guarantee both site presence and swift responses to technical and installation queries were met.

Ganson UK and Hush were able to ensure all material was supplied over an 8-week period to meet the time frames on site.

A multitude of sustainable elements has made this school a successful build and getting the acoustics right has significantly contributed to the school’s success.