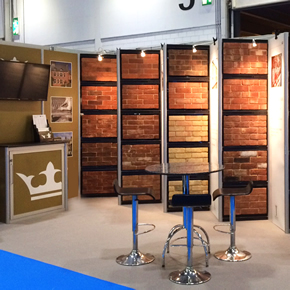 Imperial Bricks has signed up to exhibit its bespoke handmade, wirecut and pressed bricks at Jewson Live, which is scheduled to take place at Birmingham’s NEC on 15th December.

The company’s ‘library’ of bricks will be displayed on Stand B3 at the show, where exclusive discounts will be available on a number of products. Its newly launched 3” Handmade brick, for example, will be on sale at a discounted price.

Imperial Bricks will also be hosting a ‘Spot the Difference’ competition. If participants can correctly choose between a genuine reclaimed brick and its replica product, they will be in with a chance of winning £100 worth of restaurant vouchers, a 42 inch TV or an iPad.

In addition, Jewson ‘Juice’ bonus points will be available on a number of products.

Offering an extensive range of traditional handmade and reclamation bricks, Imperial Bricks is one of the UK’s largest single suppliers.

It provides a range of services, including ‘brick-matching’ for different regions, and bespoke ‘weathering’: the company’s team is able match bricks to existing structures to ensure that restoration work blends in seamlessly.