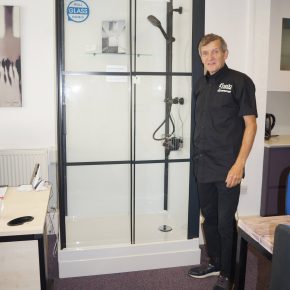 After decades in the plumbing trade, Tom Pendrick, a long-serving plumber and installer located in Neath, South Wales, has opened a Kinedo-only showroom, which doubles up as a training centre for local plumbers interested in Kinedo cubicle installation.

Tom first came across Kinedo 20 years ago, and during the past two decades, he’s installed Kinedo shower cubicles in his own properties and those of his customers. Tom’s showroom has the full range of Kinedo cubicles on display, because, he says, there is a unit for everyone.

At Ace Inspirations showroom at The Hub in Neath, Tom displays the new Brooklyn, which has a model with a modern black crittal frame and panels and black shower fittings and is aimed squarely at younger consumers.

He also has the Kinemagic Serenity, a family favourite with its fold-down seat and handrail, which is popular with families who have young children but equally favoured by older, less mobile customers who have the peace of mind of a seat and support rails if necessary.

Other models include the Kineprime Contract, with its sturdy one-piece plastic interior and the Eden, Moonlight, as well as a Kinemoon tray and Kinestyle glass panel. 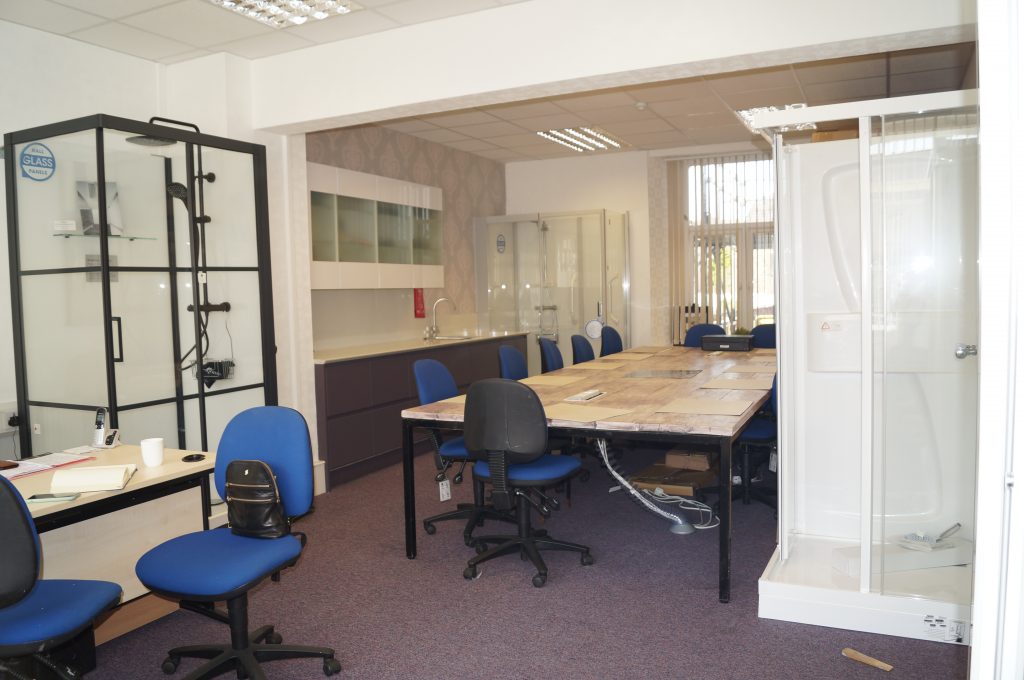 In addition to the showroom, Tom is setting up installer training at his premises for plumbers who want to take advantage of the installation benefits of the cubicles.

This would fulfil Tom’s ultimate aim to become a supplier rather than an installer as he ages. As part of the training, he will demonstrate how Kinedo offers a tremendous commercial opportunity for plumbers and fitters who will enjoy repeat business time and time again. Typically, when one customer purchases a Kinedo, a family member or friend tends to do the same.

‘Simple to clean and maintain’

Tom says: “During my career as a plumber, I have been called out to so many jobs where the issue was leaking showers. I was always interested in solutions that could eliminate that issue. Silicone can degrade over time, and grout can crack.

“This can seep through wooden walls and floor joists, causing rot and instability. At this point, the customer calls a plumber in, but it can be too late to fix the original shower.

“I found that the all-in-one cubicles from Kinedo not only address these issues, but they look great, are simple to clean and maintain and can be fitted in a day – including removing an old bath or shower. The beauty of installing Kinedo cubicles is that you don’t get called back in to sort aftercare issues.

“Once fitted, they are also ready for use immediately, so no waiting for grout and silicone to dry. When dealing with the brand, it’s the customer service that sets them apart.

“During one installation, I lost a blind-headed bolt – the Kinedo technical team sent a replacement – no charge – as well as a few spares in case.

“They arrived early the next day. The team also did all the legwork to obtain a seal for a discontinued model – which let me fix a customer’s cubicle and made it good for several more years. Everyone in the team is so helpful.”