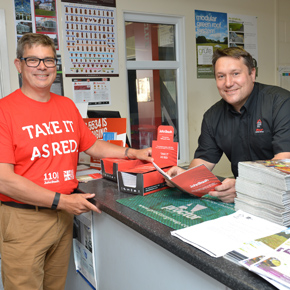 John Brash & Co has launched a campaign to raise awareness of the recently introduced safety and quality rules for the roofing industry.

Experts from the East Midlands-based timber company will visit more than 300 venues across the UK to reinforce the key messages of British Standard BS5534:2014.

The company has also produced 20,000 copies of a new guide to the British Standard for slating and tiling for pitched roofs and vertical cladding.

In support of the new guide, John Brash & Co has produced a series of promotional packs that include point-of-sale material, banners and t-shirts.

Its teams will hand out the packs at builders’ merchants and roofing centres across the UK to remind the trade about the new roofing rules.

Christian Brash, the company’s chairman, began the campaign by handing out the first packs to a builders’ merchant in Newark.

“This is the most important development in the roofing industry in the last five years, and it’s vital that this standard is fully embraced and fully supported,” said Christian.

The guide is designed to help builders, roofers and tilers get to grips with the new rules of BS5534:2014 for both new and existing properties.

Christian added: “BS5534:2014 is great news for the roofing industry, as it reflects a lot of the improvements, particularly in working practices and quality of products, that have already been made.

It occurred to us that a quick guide to the standard that highlighted the key facts and changes would be useful to the industry, so we worked with John Dodd, the chairman of the BSI committee, who was responsible for drafting the standard, to create an accompaniment that is simple and digestible.”