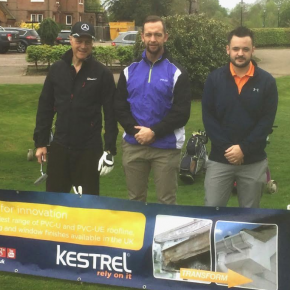 Wind and rain didn’t dampen the spirits at Kestrel‘s recent golf day, as they teed off for three children’s charities.

Despite being one of the wettest days of the year, as the rain cascaded from dawn to dusk, over 150 golfers joined the golf day and dinner, organised by Norfolk-based DMD Installations.

This was the fourth annual DMD charity golf day and it raised a stunning £9,000 for Great Ormond Street Hospital, East Anglia Children’s Hospice and Finnbar’s Force, which treats children with brain tumours.

Steve Bowden, commercial director of DMD Installations, commented: “The rain was torrential but our 36 teams still took to the course and raised thousands of pounds for three great causes.

“A huge thank you to Kestrel for their continued support year after year. We hope they’ve dried out now and look forward to welcoming them back in 2020 when, hopefully, the sun will be shining!”

“We’re already looking forward to next year’s event, and have put in an early order for sunshine!”