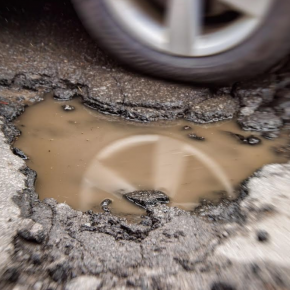 With local authorities facing pressure regarding pothole numbers on roads, Aggregate Industries’ Contracting Division has revealed the standardisation of asphalt specification could help to improve roads’ durability and performance.

This comes as latest figures suggest motorists are in the midst of the worst pothole crisis in nearly ten years, with a record 10,000 reported in the last four months. The Asphalt Industry Alliance say roughly a fifth of UK roads are considered ‘structurally poor’, which translates to them only having five years of life remaining.

For cash-strapped local authorities facing a £9.31bn road repair backlog, increasing pressure from the public to improve the condition of local roads has been created; Aggregate say standardisation of asphalt specification has a massive role to play.

Paddy Murphy, Managing Director of Contracting Services at Aggregate Industries, said that although repairing potholes is unquestionably expensive for cash-strapped local authorities, the fact the past decade has seen them collectively spent over £1bn fixing 17.9 million potholes means a different approach is required.

“At present many local councils take a reactive approach to road maintenance, whereby each local authority uses different methods and materials to carry out roadworks, including pothole repair, meaning the process can sometimes be inefficient and costly,” Paddy said.

“As such, given the escalating deterioration of Britain’s roads, the case for local authorities to adopt a standardised strategy to asphalt specification and road surfacing has never been greater.

“For local governments grappling with ever-tighter budgets, carrying out planned and proactive road maintenance doesn’t have to cost the earth.

“In fact, with the help of road surfacing experts such as ourselves it can actually go a long way in preventing potholes from occurring in the first place, and in the long-run will prove much more cost-effective in building a road network for the longer term.”