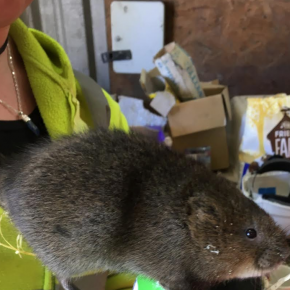 Looking at the Vole picture with Aggregate

As part of Aggregate Industries‘ commitment to helping protect the wildlife on its operation areas, this spring saw the company carry out a large scale water vole relocation.

In one of its biggest conservation projects thus far, Aggregate has helped to reverse the declining numbers of the loved animal, which is happening at a rate of as much as 30% in the last decade – now the UK’s fastest declining mammal.

When planning to embark on a major modification of its flagship satellite quarry on the Isle of Grain in Kent, Aggregate took all measures possible to eliminate any negative impact on the endangered voles.

This involved the safe migration of water voles to a dedicated safe place in Exeter, whilst the modification works take place.

The commitment and hard work of all involved meant all water voles were successfully migrated to their specially-designed, temporary new home on 22 April.

Credit to Aggregate Industries’ unrivalled commitment to safeguarding the ecology on the areas it resides, this initial aspect of the project has cost over £200k so far.

Steve Campbell, Project Manager at Aggregate Industries, comments: “It’s a real tragedy, but the reality is that the much-loved water vole, once a staple of our British wildlife, is veering towards extinction if current rates of decline continue.

“As such, as a business deeply committed to its ecological responsibility, we feel very passionate about doing our bit to help.

“That’s why, back in 2014 when we first appointed an ecology expert to carry out a full assessment of the land we were planning to work on, a large number of water voles were identified, therefore, we wanted to do everything in our power to keep them out of harm’s way.

“It’s been a long and arduous process but well worth it – it was wonderful to see the voles safely arrive in their temporary new home, and we are happy to say they have settled in soundly.”

Reflecting on Aggregate Industries approach to the migration process, Derek Gow from Derek Gow Consultants commended the team for their efforts: “In comparing this project to others in and around London taking place right now, Aggregate Industries demonstrated a greater understanding of the tasks than I’ve seen on any other sites.”