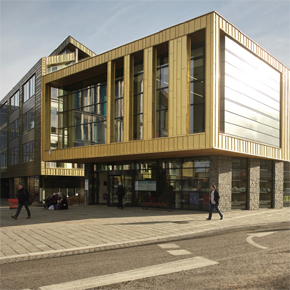 Winner of the Public Building category of the Building Performance Awards 2017, the new civic centre for Bath and North East Somerset Council demonstrates that it is possible to deliver a building within local authority budgets that is low carbon in use.

In this month’s issue of PSB Magazine, Sara Kassam, head of sustainability development at CIBSE, explains how this was achieved…

Keynsham Civic Centre (KCC) is a pioneer among sustainable office buildings. While many office designs aspire to be green, their performance in use often falls a long way short of their designer’s intentions. The design team for Keynsham’s new Civic Centre building set out to create a building that would deliver low levels of energy use in operation.

Two years after it opened and the building is living up to expectations – almost. The design achieved an EPC A. Its DEC rating is currently B, a little short of the A-rating the designers had targeted. However, further energy improvements are in progress and its energy consumption is expected to fall still further.

The building’s impressive low carbon achievements were recognised by CIBSE, when the scheme won the Project of the Year – Public Use category at this year’s Building Performance Awards. The judges said the project showed “Good focus on performance objectives …. with strong collaboration from the outset in the project team.”

This pioneering project is the result of a challenging brief set by Bath and North East Somerset Council. It wanted its new civic centre to show developers that it is possible to deliver a building within local authority budgets that was low carbon in use.

To deliver an office that was low carbon in use, the key was to start out with a robust, low energy building at the outset. The scheme’s design incorporates lessons learned by Max Fordham from its previous experience of low energy offices, which is to make the building’s form and fabric work hard to omit mechanical plant, which is costly to install, operate and maintain. As a consequence, Max Fordham adopted what it terms a passive first approach to the architectural and services design.

To do this, it orientated the four storey building so that its principal façades face north/south to help control solar gains. With this orientation, larger windows were created on the north elevation to allow daylight in without direct sunlight. Smaller windows on the southern façade are fitted with light shelves to bounce light deeper into the floor plates.

The building’s narrow, 15m wide floor plates encourage cross-ventilation while split, pitched roofs incorporate clerestory windows. As the windows are set back from the façades, road noise was less of an issue so the clerestory windows open to allow the warm air to rise up and out of the building. In addition, the south facing pitch of the roof is aligned at 15° to optimise the performance of the building’s 1,150m2 photovoltaic array.

Even the building’s structure has been designed to complement the natural ventilation strategy. It comprises a steel portal frame with a cross laminated timber infill, to minimise embodied carbon. Precast concrete floor planks are incorporated into 50% of the building’s floor area to provide thermal mass to absorb heat during the day. This heat is then purged at night, when outside temperatures are lower. 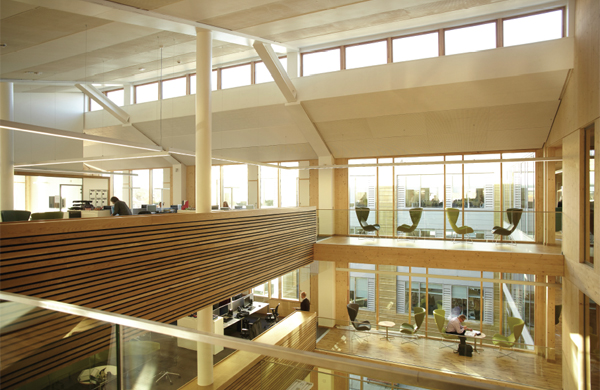 To future-proof the building against future effects of climate change and increases in occupant density, cooling pipework has been cast into the concrete planks for future connection to a chilled water circuit.

Winter heating is provided, via a heat pump, by the water cooling system for the IT servers. This provides up to 20% of the building’s heat. The building has two heating circuits: a constant temperature circuit serving the underfloor heating system and a variable temperature circuit serving the perimeter trench heaters to prevent down-drafts from the windows. Top-up heat is provided by boilers.

Even the lighting has been designed to save energy. In circulation areas it is automatically dimmed as daylight levels increase; presence controls turn the lighting off if the area is unoccupied. Lighting to the main work areas is in the form of floor-mounted lights under control of the occupants. These lights can be switched off as a group when daylight levels reach 500lux or when kill switches are activated on each floor plate.

The metering strategy was developed to enable energy consumption to be reported against end use, with many floors subdivided to aide the identification of anomalies.

Achieving a DEC A-rating is about closing the performance gap between design intent and operational reality. To help do this, the scheme uses Soft Landings. This is a process by which the client appoints the designers and constructor to stay involved with a new building beyond completion and into the critical period of occupation to help fine-tune and de-bug systems and to help occupiers to best manage what has been delivered.

As a result of Soft Landings, one of the big differences on this scheme is that the contractor, Willmott Dixon, Construction is responsible for reviewing the building’s energy performance on a month-by-month basis to identify where this differs from the energy budget and then explaining why the difference has occurred. The project team then works together to resolve the issue to further optimise the building’s performance. It is an approach that appears to be working.

“The building uses building physics rather than being based around complicated technology; there was no financial uplift for it to be built to high energy performance levels; and it is a nice working environment, all of which makes me proud to show people around this public sector building,” said corporate sustainability officer Basford.

“The wellbeing aspects of the building are also important to me as a member of staff. Apart from providing plenty of natural light to the building, the windows have opened up some fantastic and alternative views of Keynsham and the surroundings including lots of greenery,“ she added.

The energy data on the left shows how energy consumption is falling over time as the building systems are optimised in response to the occupants as the team continue to progress towards their DEC A-rating target.