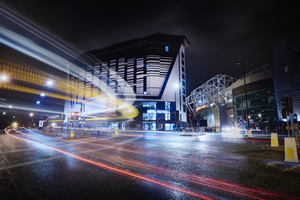 Last week, I was invited for a tour of Hotel Football, Manchester by Martyn Wherry and Ray Conboy of LED lighting specialists, Luxonic.

Opened in February, the £24m hotel is the brainchild of Manchester United legends Ryan Giggs and Gary Neville.

As youd expect, it features football-themed dcor throughout, along with a rooftop five-a-side football pitch and a Caf Football restaurant; all standing a pitch length away from Manchester Uniteds Old Trafford stadium.

Hotel Football is steeped in memorabilia and references to the beautiful game.

Its Old Trafford Supporters Club sits in the basement and features a mural of supporters at the 2008 Champions League final in Moscow, spelling out the word believe.

The hotels Caf Football has an impressive wall covering detailing the history of World Cup footballs.

Its unsurprising that, on Manchester United match days, a standard room can be as much as £350 a night.

The companys design-led approach is clear across all 12-floors of Hotel Football.

Luxonics individually-tested, long-life LEDs are embedded into the ceiling to light every aspect of Hotel Footballs subtle football dcor the best touch being the wallpaper lined corridors, patterned with hundreds of Panini sticker-style images of footballing legends.

Operating on a tiered Phillips E2 DALI controls system, the lighting plays a central role in all areas of the hotel.

The system allows luminaries to be controlled and grouped together in logical areas, despite being non-DALI fittings, providing a solution which is both cost effective and energy efficient.

This enables Hotel Football to mood light individual rooms for different occasions and events a feature most prevalent in the hotels Caf Football.

Serving up aptly named dishes such as the Giggsy, the Overhead Kick and El Clasico, the restaurant is steeped in football memorabilia right down to its menu.

The restaurants lighting is controlled on a single network, altered dependent on the time of day, season or atmosphere – all whilst offering remote analysis for the facilities team to measure the systems ongoing efficiency.

Drawing in an estimated 3,000 fans each and every match day, an important aspect of Hotel Footballs lighting system is its energy efficiency.

The LEDs are manufactured at Luxonics in-house dedicated facilities in Basingstoke, and have a predicted lifespan of 200,00 hours and a Carbon Trust rating.

This means that Hotel Football can be lit to any specified level at below half the power consumption of a fluorescent installation.

This combination of subtly hidden, low power lighting with open area and corridor optic means that the project covers exacting emergency standards with a minimal number of lighting points.