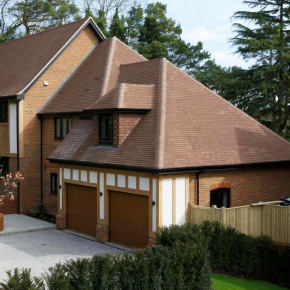 With the appearance of a handcrafted tile and the robust performance of concrete, the BMI Redland Heathland tile has proven perfect for an exclusive development in Warlingham, Surrey.

Sited in a private estate, the Butterfly Walk development replaced a bungalow with three five-bedroomed homes overlooking the Surrey Hills in a semi-rural woodland setting.

One of the principal concerns of the developer, Chartwell Land & New Homes, was to produce homes to complement the existing houses, whilst satisfying the concerns of both the residents’ association and the planning department of Tandridge District Council.

The roofscape was a particular concern, with the roofs being large in proportion to the houses, all having double garages roofed in the same material. This meant the roofing material would make a huge impact on the appearance of the area. 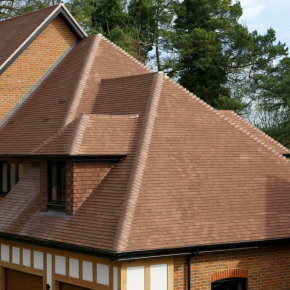 On the recommendation of Southgold, the Croydon-based family firm of housebuilders, Chartwell proposed the BMI Redland Heathland tile in Ember as a material that would be in keeping with the local roofscape, whilst also blending in as though the new homes were part of the original setting.

The roofs have two vertically clad dormers with several roof windows and solar panels on the rear roof slopes. The roof was challenging for the roofing contractor, as the houses are stepped and have five levels.

Each floor is split into two, with a lower and upper level on each floor; Gavin Bradley, Southgold Contracts Manager, commented: “The roofs on all three houses were complex, with a variety of valleys, hips and ridge lines to accommodate.” 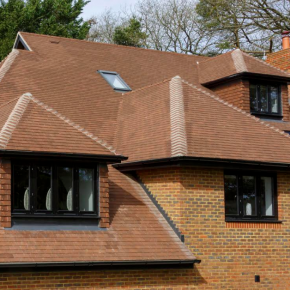 Southgold has worked closely with Chartwell for eight years and introduced it to BMI Redland’s Heathland Ember, which is now specified as the first choice where plain tiles are sought.

Gavin added. “We’re big fans of the Heathland tile and you can see why on these roofs – they look fantastic and they work well in a variety of scenarios, so we’ve used them a lot. They’re very versatile and give a touch of class.”

BMI Redland’s Heathland tiles are a more sustainable product than the handmade clay tiles they mimic because they incorporate a substantially reduced level of embodied carbon.

The concrete plain tile features variations in hanging length, irregular sides and subtle surface texturing and is finished with randomly applied fine sands. All these come together to create the visual features of a handmade clay tile.

Heathland combines natural weathered character with the performance of a machine-made tile in an attractive and cost-effective roofing product. Unlike its handcrafted counterpart, the latter-day Heathland has undergone thorough testing, including being subject to driving rain and high winds, generated by BMI engineers in their wind tunnel.

These tests demonstrate the tiles meet all the requirements of BS 5534: 2014 + A2: 2018 Code of Practice for Slating and Tiling, providing they are installed in compliance with BMI Redland fixing recommendations.