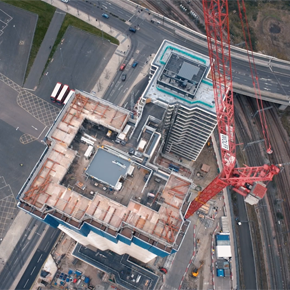 Prater has completed an extensive project on buildings S7 and S8, known as the Glasshouse Gardens, at The International Quarter (TIQ) in London. The company was appointed by Lendlease to deliver a complete building envelope to schedule, whilst achieving a BREEAM Excellent rating.

The International Quarter (TIQ) is a four million square foot business development scheduled for completion in 2025. TIQ comprises flexible workspace and three acres of parkland and open spaces, in addition to 330 new homes, a hotel, shops, cafes and community facilities.

Valued in excess of £2billion, the development will create over 25,000 new jobs and thousands of construction jobs.

The Glasshouse Gardens is a joint venture between main contractor Lendlease and London & Continental Railways that is currently under development.

The two buildings will sit at 30 and 17 storeys high respectively, and will consist of studios and one, two and three bedrooms apartments. First occupancy is scheduled for 2017.

Design and planning works began under a Pre-Contract Services Agreement (PCSA) in early 2014, with Prater contracted to install a building envelope made up of Schuco aluminium windows and doors, spray applied balcony waterproofing works, a bespoke steel and glass balustrade and external wall cladding.

The early PCSA with Lendlease allowed Prater to consider the build-ability, health and safety on-site and the overall construction programme. As a result, Prater carried out the cladding works quickly and efficiently through a unique process of using moving screens as working platforms.

Replacing the need for scaffolding, the screens allowed materials to be passed through without having to negotiate scaffolding stanchions or gaps in the working platform to create a clean and safe environment for workers.

Alistair Hill, Project Director at Prater commented: “One of the key aspects we considered when investigating working from mobile screens was creating a safe working environment for our installation team. Ensuring everybody on-site was aware that, unlike fixed scaffolding, the screens were moving every day was critical, as was controlling access to them.

It was absolutely imperative that we kept to the build schedule – otherwise the screens would simply stop moving and the whole project programme would be at risk. We are very proud that the timescales were not only maintained, but improved upon.”

The project to deliver The International Quarter has benefited from close collaboration with Newham Borough Council and charitable trusts such as Be Onsite to offer residents the chance of a career in construction, through thousands of new jobs roles and access to the education and training programmes required.

Both residential blocks are now nearing completion, with S8 expected to be finished in Q3 of this year, and S7 scheduled for completion in May 2017.