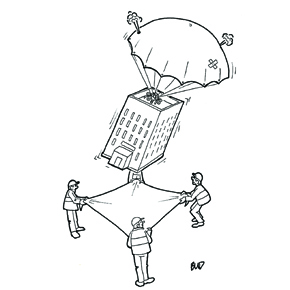 From 2016, the Government Soft Landings policy will be mandatory and will apply to all central government building projects.

In the October issue of PSB Magazine, Jackie Furey, of workplace consultancy firm, Baker Stuart, explains how perception surveys and post occupation evaluations are critical in bridging the gap between predicted and achieved performance…

It’s not uncommon for an organisation to move into a new multi-million pound building, only to find that that within a few weeks of occupation, it doesn’t quite perform as well as planned. As you can imagine, this can be incredibly costly, impacting heavily on staff performance, management, efficiency, morale, energy consumption and much more.

One of the most common cases of such failure is when an organisation occupies a trophy building. Here, millions of pounds are spent, often with great focus on the aesthetic value of the building but to the detriment of the most important element of a workplace – functionality.

The glass atrium ceiling may, for example, be an impressive sight, however, the crew of 15 window cleaners and their specialist equipment probably weren’t considered in the planning process.

Here a big gap between functionality and aesthetic values exists due to shortcomings in briefing, design and construction. A problem which is intensified by the almost complete separation of construction and operation. It is exactly this that the Government Soft Landings (GSL) policy aims to eradicate.

GSL is the new Government strategy that will become mandatory in the public sector from 2016. The policy will ensure that the transition from construction to occupation is as seamless and problem free as possible and that operational performance is fully optimised. As a policy that will apply to all central Government projects, it is being rolled out by the BIM (Building Information Modeling) Task Group, a UK Government-funded group, managed through the Cabinet Office.

Part of the strategy involves the encouragement of those who can offer critical input in terms of how the building should function, making their voice and requirements an intrinsic element of the development. As from 2016, the building’s end user (or staff) and facility managers will all work with architects and building teams to gain a clear understanding of exactly how a Government building should operate, resulting in a built environment that has functionality and efficiency at the forefront of its purpose.

A critical element in the success of GSL lies in the input provided by the client. An effective way of gaining an insight into the needs of the workforce is to carry out a series of staff perception questionnaires and workplace studies to establish exactly how each member intends to use their working environment.

Understanding working behaviour will provide a clear and detailed brief for architects and constructors. This analysis should focus on how each individual best performs and what their environment must provide for them to do their job effectively.

Take, for example, the overall design of the workplace. There will be various preferences in terms of how staff work most efficiently. While some may be more introverted and prefer to work in isolation, others may require a more collaborative working environment.

Capturing and analysing detailed information on the requirements of all staff will provide a foundation of knowledge for what the building should be able to offer, allowing you to identify the most important features. For example, if you were considering adding a certain feature within a workplace, you could survey staff to ask them whether it would positively enhance the way they work, or if it was something they would actually want, or use. Finding out that the feature wouldn’t be used at this stage is much more cost effective than realising it is underutilised after it has been added, post occupation.

It is also important to consider input from the facility managers to ensure that aspects on building management and maintenance are included in the brief. If carried out correctly, perception surveys will enable you to capture the vital information that is critical to the initial briefing of the architects and building teams.

Post Occupancy Evaluation (POE) is the process of ascertaining how successful the development has been and if there is room for improvement or lessons that can be learned. POE also allows you to make adjustments to the environment as you evaluate, to ensure it functions efficiently.

POE tools such as cost in use reviews, staff perception questionnaires and space utilisation studies should be undertaken and collated shortly after completion. They should then be done periodically throughout the first three years of occupation to ensure the project has been successful and has delivered the desired outcomes, i.e. the building is fit for purpose for the staff, the business as a whole and importantly, the environment we live in.

Levels of staff satisfaction are an important aspect of POE. Staff questionnaires that focus on exactly how the environment is directly supporting each individual in their role will give you a broad outlook on the functionality of the new environment and will also illustrate the success of the building according to each department. These should be made pre and post occupancy, on a regular, on-going basis.

Findings from pre-occupancy and POE studies will also reveal data that should then be used to develop benchmarks for the workplace. This will enable you to establish the criteria for success, and any achievements, adjustments or modifications can then be measured against these.

There are various ways to monitor the utilisation or the success of a workplace by reviewing working behaviour. The most effective method is to appoint an audit team to physically observe each environment making point in time observations by recording findings via mobile technology.

Here, the latest CAD (Computer Aided Design) systems are most effective in monitoring, accumulating and analysing workplace information. Ordinarily, each observation would take place at half hourly intervals over a two-week period, providing insight into the ways in which every area is utilised.

This enables a user to analyse each individual environment – from break out zones to single workstations – entering relevant information on utilisation, which can be collated and analysed at the end of the monitoring period.

An in-depth POE such as this will offer information that would ordinarily be overlooked. Take, for example, the meeting room that caters for ten people. At a glance, it may appear that this space is fully booked and therefore constantly in use, but by reviewing the utilisation of this space over a period of two weeks, you may find the room – despite being constantly booked – is only used to its full capacity 4% of the time.

You may also find that instead, single workers or pairs are using the space for isolation or one-to-one meetings. Access to such detailed information relating to behaviour and utilisation, will demonstrate clearly how effective individual areas of a workspace may be. It will also highlight that there are inefficiencies in other areas and that workers are in need of a space (in this case for contemplative work) that the building currently does not offer.

Such POEs will offer an understanding of client requirement that will allow you to swiftly reduce frustrations, issues and expenditures. In essence, if performed correctly, the involvement of the building users and managers, the assessment of their needs (prior to occupancy) and the monitoring of their behaviour post occupancy, will all play an integral part in the development of improving the functionality of government buildings.