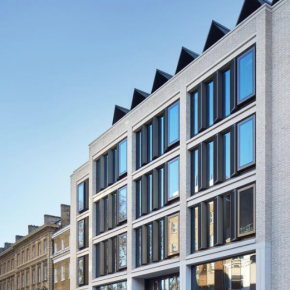 London’s prestigious Saatchi Gallery recently saw a large audience of building industry professionals descend on it to celebrate the 2019 Schueco Excellence Awards for Design and Innovation.

Taking place on 27 June and organised by Schueco UK, in partnership with Architecture Today, the Excellence Awards, now in their sixth year, were set up to recognise outstanding contemporary architecture in Great Britain and Eire.

This year, more companies than ever before entered the Excellence Awards, with over 160 submissions spread over nine different Award categories.

Paul Williams, founding director of Stanton Williams and Chair of the judges, commented: “The quality of the 2019 submissions in the majority of categories was very high, so it was never going to be easy to select obvious winners. However, after much debate the panel did reach a unanimous decision.”

The Overall Schueco Excellence Award went to the UCL Student Centre, London, by Nicholas Hare Architects, which was also the winner in the Education category.

Positioned at the heart of UCL’s Bloomsbury campus, this flagship project provides 1,000 spaces for individual and collaborative study, a student enquiry centre and a café.

The building is designed to achieve exemplary sustainability targets including a BREEAM Outstanding rating.

The judges followed the precedent established in 2018 and decided to give an Overall Commendation Award, which was won by The Ray, Clerkenwell, London – a dynamic new building by AHMM providing flexible spaces for office, retail and hospitality uses.

This project was also voted the winner in the Commercial Building Category.

The winners in the other Award categories were:

In addition to the outright winners, there were seven further commendations:

The panel of judges for the 2019 Awards were:

Brick manufacturer Vandersanden, renowned for its innovation, sustainability and craftsmanship, has been awarded a prestigious 2-star certification under the Brickmakers Quality Charter.

This year, Newton has produced a new product catalogue to showcase its extensive range of products for waterproofing, damp proofing, gas proofing and structural protection and repair.