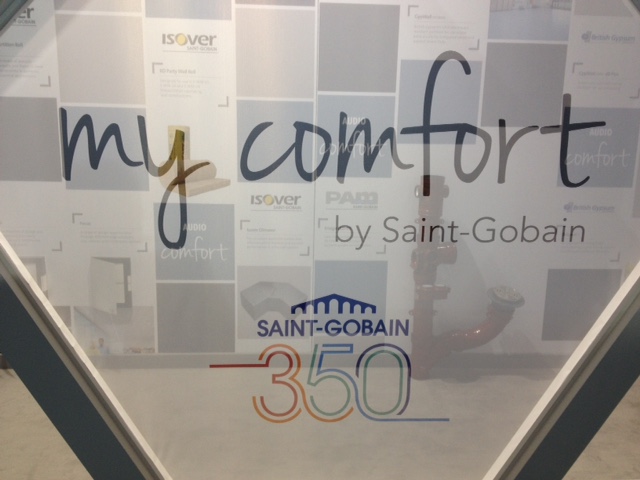 Review of Ecobuild 2015 including comments, images and videos

Annabel Lammas from Buildingtalk interviews the Dulux dog, the star of the show.

Though the number of exhibitors was down this year, Ecobuild is still the biggest sustainable design, construction and energy event for new build, refurb, commercial and domestic buildings in the UK. The show was busy and included a number of key seminars and events that were all well attended. We have some comments below from some of the speakers.

It seemed like BIM came of age in 2015 at Ecobuild with seminars, discussions and an array of enabling products.

The two stars of the show for me were Saint-Gobains 350 year anniversary dance celebrations and the Dulux dog making friends with all the visitors to their stand.

Saint-Gobains history dates back to 1665, when it was formed to produce glass on an industrial scale for the famous Hall of Mirrors at the Palace of Versailles, the royal palace of King Louis XIV of France. This location formed the backdrop to the dance celebrations in period costume – every hour near the entrance to Ecobuild.

Saint-Gobain also launched their Multi-Comfort concept – a new way of designing and building sustainable, healthy and comfortable homes and workplaces.

Annabel Lammas from Buildingtalk joined a queue of people who wanted to meet and greet the perennial Dulux dog. Interesting focus for Dulux Trade stand at Ecobuild was demonstrating how colour isnt just a matter of aesthetics but can deliver well-being in many ways. For example, helping to make rooms feel bigger, lighter, brighter and even save energy.

I watched the Glassolutions video about their glass floor walkway installation at Londons Tower Bridge. Brilliant project but a little eerie walking over glass looking down on the river Thames 42 metres below.

I listened to Rob Warren, their Head of Technical, talking about regulations why they are needed and their efficacy in delivering better and more sustainable buildings. He stressed the need to focus on the performance of buildings rather than just ticking regulation boxes. You can also read more an energy efficiency from Rob via his recent Blog on Buildingtalk.

One of the best new products at the show was the FLIR C2, a pocket-sized thermal camera. An easy way to see heat patterns to show problems such as the sources of energy waste and plumbing issues. I think there will be an enormous demand for the C2.

The most hospitable stand at Ecobuild was Wilo. It was an opportunity to meet colleagues from the press and PR over lunch and be briefed on their new energy efficiency products including the Wilo Helix Excel, now available in the UK.

Some of the speakers at Ecobuild 2015

The andpound;40 million scheme will be built by main contractor Willmott Dixon and will see the regeneration of a former coal mining region of East Kent into an exemplar project that will be home to a green technologies sustainable business and commerce park.