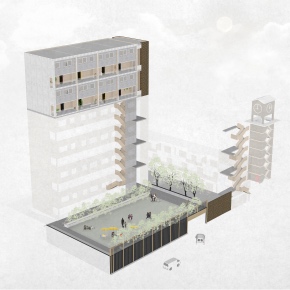 Rising to the challenges of urban construction

Metsä Wood explores the possibilities of using timber to help solve the housing crisis in our cities.

Urbanisation is one of the most significant issues facing humanity today. By 2050, two thirds of the world’s population will live in cities. Consequently, urban growth is fast outpacing the ability to build affordable and sustainable living space.

Cities all over the world are in dire need of new ways to house a rapidly growing urban population. Nowhere is this more evident than in the UK and in our capital city, where space is at a premium and housing the ever-growing population continues to pose a huge challenge.

London is at the heart of the housing crisis with experts forecasting that the city will require 60,000 new homes a year (around double the current rate) to meet new projections. Innovation in building methods and materials is required for house building in urban areas to hit these targets, while ensuring fast and sustainable construction.

One obvious, yet often overlooked solution is to start building up, and stop tearing down. Utilising new modern timber materials enables several stories to be constructed on top of existing structures. A building extension constructed with a timber frame can be a fast, sustainable and inexpensive solution. 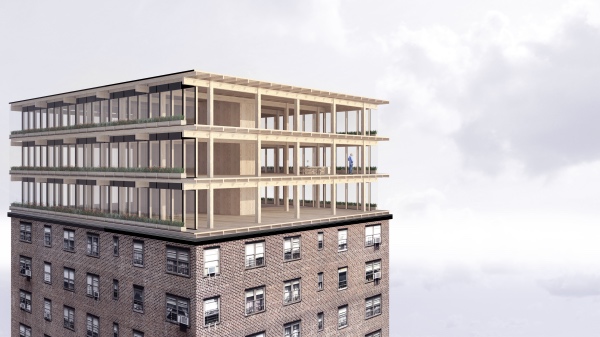 At a recent roundtable event hosted by Metsa Wood in London, industry professionals, including architects, designers, planners, and academics discussed the merits of modern timber and how it could be better utilized in urban architecture.

Speaking at the event, Rory Bergin of HTA Design said: “We find there is still a lot of anxiety and lack of knowledge, particularly on cost. The way to further innovation is to push at the sweet spots where the benefits are indisputable to the client.”

These comments were echoed by Nick Milestone of B & K Structures, “The people we need to convince are quantity surveyors. I’m starting to see that firms are now measuring the costs of engineered timber against traditional construction. They are saying to developers they can now build it quicker, lighter and cheaper. It is now a competitive solution. Reinforced Concrete frame is becoming very expensive.”

Linda Thiel of Sweden’s White Arkitekter discussed how timber is being used in her country for commercial and public buildings as well as houses, where it wouldn’t have necessarily been considered in the past. She said: “Too often engineered timber is being used simply to replace concrete. Once designers see it as a different material, design will flourish and create a new architecture.”

This is particularly true in urban areas, such as London, where space is at a premium and planners are looking to build on existing structures to maximise every last square foot of space.

Research shows that approximately a quarter of existing buildings are strong enough to carry additional floors made of wood. Moreover, it is the only material light enough to build quickly on to existing structures. This makes wood a highly promising building material for providing living space for billions of people – while also preserving the architectural heritage of our cities.

One of the other main considerations for considering timber in urban construction is energy efficiency, not only during the construction process but also for the lifetime of the building. This is extremely important in London as it currently has a target of a 60% reduction in carbon emissions by 2025.

With homes and workplaces currently accounting for 78% of CO2 emissions in London and with 80% of the existing housing stock likely to still be in place by 2025, it is essential to improve the energy performance of new builds in order to cut costs and carbon.

In the UK, building a million new homes by 2020 in order to meet the demand of the UK housing crisis requires innovative thinking and the need to explore new possibilities, such a hybrid construction, using a range of materials including steel, concrete, brick and timber.

Through its Plan B project, Metsä Wood has been challenging the perception of architects, constructions engineers and builders as to what is possible with timber construction.

As part of the project, which explores various possibilities of building with wood, Metsä Wood offers detailed examples of how to build recognizable, but modern versions of well known architectural buildings, such as the Empire State Building using wood as the main material. The models have been exhibited at trade shows across the globe and have helped to raise awareness and spark debate around modern timber construction.

One of the 16 entrants based on the city of London was the impressive Chrisp Street Market project by Kalpana Gurung and Robert Buss from Studio Hoopla.

​Chrisp Street Market is a 3.6 hectare site near Canary Wharf, built in the 1950s as part of the Festival of Britain, and having been active as a street market since Victorian times. There are currently plans to build 750 new homes while upgrading the existing retail units.

According to Gurung and Buss, the proposal will “destroy most of the site and, with it, businesses, homes and community”.

They continued: “London has a housing crisis but tackling this should not come at the expense of quality of life and the destruction of diverse and functioning communities. Our proposal seeks a sustainable future: environmentally and socially, for everyone, by building on the existing structure and community.

“The Metsä Wood Plan B competition provided an opportunity to address the socially and environmentally unsustainable trajectory of housing development in London.”

“Chrisp Street Market shares the qualities of many large redevelopments around London: wholesale destruction of existing buildings, private developers with a stranglehold on profit and the ‘cleansing’ of the city.

“We should address the much more difficult, but responsible challenge of augmenting the new with the old – both physical and social.

“Laminated Veneer Lumber (LVL) is the ideal material to achieve this; lightweight, prefabricated modules can be craned into place with minimal disruption to the everyday life of the market.

“Existing residential blocks are extended upwards, using Kerto-Q and Kerto-S LVL modules while new blocks sitting on the podium itself use the same system. The timber is protected from the elements but visible through an aluminium-glazed screen and is exposed throughout residential interiors, providing a highly insulated and high quality finish.

“This system could be adapted and replicated across London and other cities, as a way to address the tide of wholesale gentrification – a more human, slower paced and responsible method of regeneration and change, while adding significant density to the areas people want to live.”

The Chrisp Street Market project is just one example of how innovative design is challenging the perception of what is possible in urban construction. It is now becoming more widely acknowledged that timber products have a major role to play in building cities of the future using fast, light and green materials.