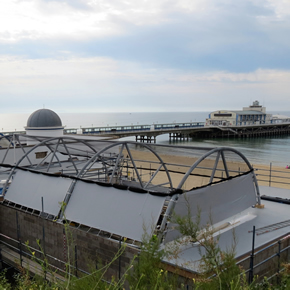 IKO Polymeric has contributed its expertise and roofing products to the £1.5 million extension of Bournemouth Oceanarium

IKO Polymeric and Excel Roofing Services worked to provide 250 square metres of roofing for the extension’s kiosk, covered walkways and stores. The extension was built to accommodate the aquarium’s new Penguin Beach Encounter, which has been five years in the planning.

At two storeys high, the new building houses ten Humboldt Penguins. Its construction has increased the size of the Oceanarium by a third.

IKO Polymeric’s Armourplan PVC single ply membrane was specified for the enclosure’s new roof. The shades Slate Grey and Mid Grey were chosen to complement its existing GRP edge trims, curved metal drips and upstands to the edge of the warm roof section.

IKO Polymeric used welded on membrane strips to fix the netting, which was originally intended to be secured with eye bolts.

The IKO team also advised on the weather detailing of the exposed metal frame: its IKO Polimar liquid approved waterproofing was specified for use to seal the existing GRP trims and the weather expose steel frame, which works to support the netting.

The company endeavoured to make prompt and efficient deliveries, as the aquarium’s Promenade was open to the public as the work was undertaken. Access to the site was carefully controlled to ensure safety standards were met.