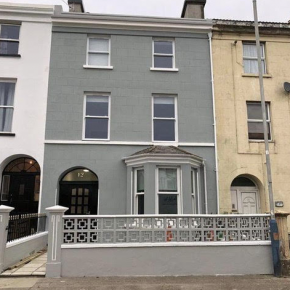 Hush Acoustics were recently called to Douglas, the capital of the Isle of Man, to a beautiful mid terraced property converted into four spacious apartments over as many floors.

The apartments are situated very close to the road and after spending time inside, some road traffic as well as public background noise could be heard from inside the property.

It was vital to guarantee appropriate acoustic measures were carried out when converting this existing property into apartments and that the party walls and/or ceilings met the required standards for conversion under the Building Regulations, Approved Document E.

This system has been created with residential properties in mind and is made up of a combination of materials that offer excellent sound reduction within the specified area.

The basement system is made up of Hush Slab 100 which is tightly packed within the joists, Hush Deep Resilient Bars, which are fixed horizontally to the underneath of the joists and Hush Multi Panel which is fixed to the underside of the bars. 15mm of Fireline Plasterboard is then used to over board the Multi Panel.

This system has been thoroughly tested to exceed Building Regulations and our competitor’s wall lining products. It is made up of Hush Multi Panel, the 15mm Fireline which is then installed over, ensuring joints are staggered.

The perimeters are sealed using Hush Isolation Tape, as well as our Acoustic Sealant. These boards are then fixed to the Deep Resilient Bars and Hush Slab 25 is fitted in between. The Bars are then fixed horizontally to the wall.

The benefits of this system are its high standards of airborne sound reduction, can reduce both flanking and direct sound transmission and creates a minimum loss of space.

This floor system is a highly rated performer and has again been thoroughly tested within areas that require exceptional acoustic control. It is made up of Hush Panel 28, which is laid over the chipboard deck and sealed using Hush Seal 20.

Two layers of plasterboard is then installed to the underside of the MF system and all perimeters sealed with the Hush Acoustic Sealant.

The client was said to be over the moon with the result, with Hush receiving excellent feedback from Andrew Bentley.

“Our flats passed the sounds test. Thank you for all your help and support. I will be happy to use your products again in future,” Andrew commented.