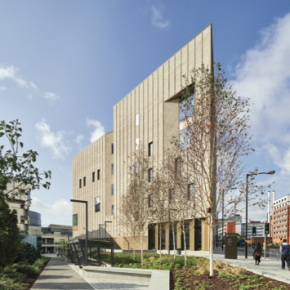 Designed by Feilden Clegg Bradley Studios, the Royal Birmingham Conservatoire’s new state-of-the-art home is the first purpose-built music college to be constructed in the UK since 1987 and is the only one in the country which has been specifically designed to cater for the demands of the digital age. The latest issue of ABC&D magazine finds out more.

The college houses five performance venues: a public concert hall with the capacity of 500 seats and a full orchestra; a 150 seat recital hall; The Lab – a black box experimental music space; a 100-seat organ studio and the Eastside Jazz Club as well as 70 practice rooms of various sizes.

The new building is in the heart of the city’s learning quarter, on the border between Birmingham and Aston. It will act as a cultural hub, contributing to the performing and visual arts within the city and region, as well as for students of the university.

The combination of careful attention to purpose-built detail, together with an over-arching vision of artistic and educational ambition, has delivered a lasting monument to the cultural investment of the city and the university. 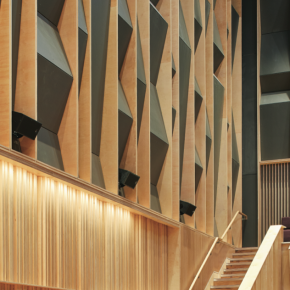 The main foyer serves the five major performance venues and provides a rich and spatially diverse welcome to the building. It forms a route which connects the city and campus entrances and divides the rehearsal spaces on the north from the performance spaces on the quieter, traffic free, south side of the building.

The Recital Hall, The Lab and Eastside Jazz Club, occupy the lower ground floor, with the Concert Hall and the Organ Studio above them on the first floor. Practice and rehearsal spaces are arranged in clusters around the different musical departments on the north side of the building.

“Our new building is the best of its kind; a space that is both warm and uplifting, both professional and humane.” commented David Roberts, pro vice chancellor, Faculty of the Arts, Design & Media, Birmingham City University.

Designed to contribute to the performing and visual arts within the city and region, the Conservatoire allows the university to play a key role in delivering the city’s strategy for arts and culture.

The Conservatoire is in Birmingham’s Eastside, part of BCU’s City Campus, and creates a new entrance to the campus from the main artery of Jennens Road. A through-foyer serves to connect the street to the campus and also negotiates the full-storey level change from the north to the south of the building. A landscaped route continues into an external performance space in the southern courtyard.

With Hoare Lea, the university aimed to create acoustic environments that would be amongst the very best in the world.

To fit within the small footprint of the building, the five venues are stacked above one another over three levels, creating a 3D puzzle where potential sound transfer must be avoided. Each venue is structurally separate, with heavy massed floor and wall construction within steel frames to form isolated inner boxes within the larger box of the Conservatoire.

Each of the five venues has its own particular character, visually and acoustically – the Concert Hall being the most complex. A combination of fine and larger scale diffusion and sound scattering treatments cover the walls and work to produce a rich, even and diffuse sound field.

The specialist acoustic requirements of the building made mechanical ventilation and some cooling a necessity, therefore energy efficiency was driven through careful selection of highly efficient system, taken on-site generation opportunities where possible.