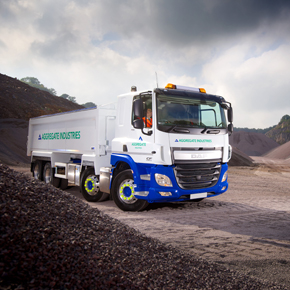 As reckless lorry driving continues to make the news, Aggregate Industries has stressed the fact businesses simply must pay extra diligence to guarantee the safety of their haulier providers.

This year has seen a whole host of headlines concerned with poor lorry driving, with property and infrastructure damage, accidents and, in some scenarios, fatalities, caused as a result.

Head of Road Logistics at Aggregate Industries, Ben Young, commented: “The increase in reported dangerous lorry driving in the news this year is shocking and it’s something that all businesses, whether operating their own fleet or using a transport provider, have a duty to address.

“At Aggregate Industries, for example, we operate a robust theory and practical testing process when recruiting a new haulier which includes requiring them to achieve a minimum of FORS Bronze accreditation – which is followed up with regular monitoring and maintenance as part of our safety programme.

“Although most drivers deliver high standards on a consistent basis, we wanted a fair and transparent approach to dealing with the few occasions where standards drop, which might include driving dangerously.”

Ben emphasised the fact that drivers with bad habits put themselves and others in danger.

“With the demand on commercial vehicles and, in turn, traffic increasing, it’s vital that we take action now to raise safety standards for all,” he added.

“One of the things we have done to combat this is introduce a system to monitor driving style within each vehicle, so we can educate and further improve the behaviours of drivers working on our business.

“By adopting a rigorous approach to their in-house fleet or outsourced transport providers, which includes ongoing testing, monitoring and a “firm-but-fair” approach to dangerous driving, businesses can help to negate some of the risk on the roads.”