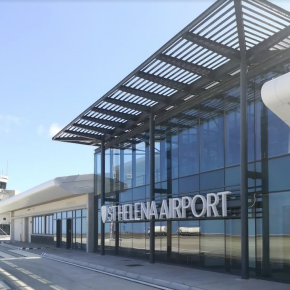 St. Helena, one of the world’s most remote island locations is using actuators, monitoring and control solutions from SE Controls Africa.

This is for a new hybrid environmental ventilation and smoke control solution at its airport terminal on the East coast.

Handling around 400 passengers each week, the airport terminal’s ventilation system is designed to monitor and control both temperature and carbon dioxide (CO2) levels, to help maintain a comfortable environment for travellers and staff, while also ensuring escape routes are kept free of smoke, in the event of a fire.

To achieve this, 46 SE Controls SECO N 24 40 chain actuators with a 600mm stroke length automatically open and close the airport terminal’s windows and vents, depending on the CO2 concentration and interior temperature, which is monitored by four combined sensor and control units, situated in different zones within the building.

External rain, wind and temperature sensors are also installed as part of the system, ensuring only ‘down wind’ vents are opened to remove the risk of rain entering the building in windy conditions.

If a fire should occur, the building’s alarm system triggers the ventilation system to switch into smoke ventilation mode, which automatically opens high level vents, while also allowing replacement air to enter the terminal at low level, so smoke can be quickly vented from the building and keep escape routes clear.

In smoke ventilation mode, the actuators are controlled by five separate SE Controls SHEVTEC controllers, which are fully compliant with all relevant fire safety regulations and international product manufacturing and testing legislation.

The SHEVTEC controllers also include a battery back up for failsafe operation even in the event of a mains power failure.