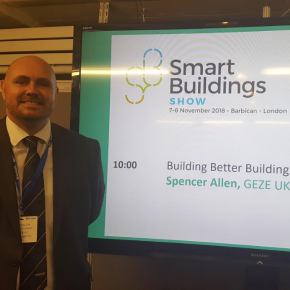 A talk on ‘Building Better Buildings Through Connectivity’ given by Spencer Allen, GEZE UK’s National Sales Manager for Window Technology, which took place at the Smart Building Show, London, featured the importance of smart planning.

The foundation of the talk was that Smart buildings must begin with smart planning and designers have a role to play by considering connectivity at the beginning of the design process.

Placing people at the heart of design, construction, operations and development decisions, will in turn create ‘added value’ by boosting productivity and generating cost-savings in human resources and building management, Spencer outlined.

Controlling a building’s systems – its heating, lighting, ventilation, air conditioning or other application, will offer improved efficiency, reduction in energy consumption and an extended life cycle of products used throughout the building.

But the greatest return on investment could be seen by providing better workplaces for its occupiers, he stated.

According to Knoll Workplace Research, a jaw-dropping 90% of an organisation’s expenditure is spent on its people – by way of salaries, ‘on-costs’ and benefits – compared with only 10% spent on operations and energy consumption.

He talked about the need for looking after people being evident: “Maintaining the health and satisfaction of employees will result in a greater return on a significant investment in any organisation’s running costs.”

It is estimated that as much as 90% of our time is spent indoors, so getting this right is obviously crucial to our well-being.

“Since its launch in 2014, the WELL Building Standard has been integral in highlighting a growing aspiration across the built environment to develop spaces that uphold the well-being of the people using them day-to-day.

“A WELL Certified™ project has the potential to add measurable value to the health, well-being and happiness of building occupants. It can also generate increased savings and productivity to the building owner or manager,” said Spencer.

He suggested much of this can be achieved through improved ventilation.

“Natural ventilation will save a property between 10 and 30 per cent in energy consumption, help remove air pollutants by as much as a third to allow for better breathing environments, provide low maintenance and easy-to-access operation of windows, helping staff feel “in control”, and more satisfied in their working environments,” he said.

He highlighted how technological advances had brought about greater opportunities for connectivity and how intelligent hubs like the GEZE Cockpit could integrate natural ventilation with the management of automatic doors, smoke and heat extraction, escape and rescue route management and access control.

He insisted, however, that it requires a vision: “The forethought of designers in considering the end game, the proposed use of the building and the desire to create a workplace that puts people at the heart of how it should operate.”