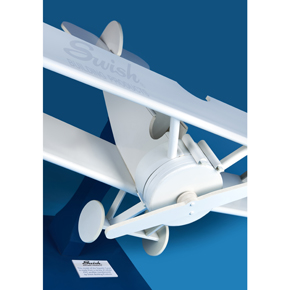 The Sopwith Camel biplane first flew on the 22nd December 1916. It went on to become the most successful allied fighter, with 1294 victories to its name. Only eight are thought to remain of the original 5490 built.

Also around 100 years ago, industrial chemist Friedrich Heinrich August Klatte became the first inventor to to receive a patent for PVC with a polymerization method for vinyl chloride using sunlight.

In recognition of the centenary milestones, Swish constructed a 1/8th scale model of the biplane, creating the wings, fuselage and control surfaces from its cellular PVC facia and soffit boards.

To further mark these anniversaries, Swish has launched new ranges of its fascia and soffit boards in cream and white foil finishes.

Swish PVC rainwater systems are ideal for specifiers that require a significantly reduced carbon footprint. The products marry a recycled core with a virgin skin and save 70% of the CO2  which would be produced by manufacturing with virgin material only.

Swish holds ISO 14001 Environmental Management Certification under which a continuous programme of targets and monitoring ensures that it uses resources efficiently and that energy and water consumption and waste is kept to a minimum.