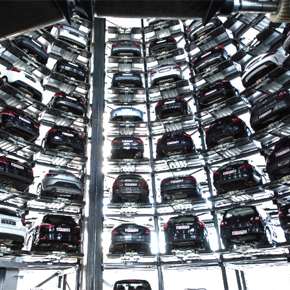 The argument for automated parking systems (APS) is stacking up

Jason Petsch, director of Skyline Parking, discusses the urgent need for APS in the UK in the July 2016 issue of ABC+D Magazine…

The rise of the machines

Despite their futuristic appearance, Automated Parking Systems (APS) are by no means a new concept. Indeed, the earliest reference to something akin to an automated parking system was the Garage Rue de Ponthieu constructed in 1905. The system consisted of a lift in the center of the structure to move cars up one or two floors where attendants on the floors would park the cars.

A variety of types and styles of APS enjoyed wide popularity in the U.S. from the 1920s through the 1960s, however, very few were constructed over the next 40 years.

While interest in APS waned in the U.S., from the 1970s onwards more advanced systems were being developed in Europe, Asia and South America. Perhaps no country more enthusiastically embraced the APS than Japan; particularly Tokyo – with an acute shortage of land it has for many years looked at ways in which to maximise the number of cars that could be stored at any one time. In the late 1990s, Japan produced more than 100,000 automated parking spaces per year to accommodate a rapid increase in motorisation driven by its rising economy.

Today, in a world with an estimated 1.2bn cars, there is an increasing demand for smarter parking solutions. With the number of cars worldwide set increase to somewhere in the region of 2.5bn by 2050, this demand and the pressure for solutions is only increasingly. No wonder that APS is back in the spotlight and, indeed, seeing something of a renaissance.

Ironically, one of the drivers for looking again at APS is their positive environmental benefits. APS offers numerous environmental advantages compared to multistory parking garages and can reduce CO2 emissions by 85% or more by eliminating the need for cars to drive and idle while searching for parking spaces. 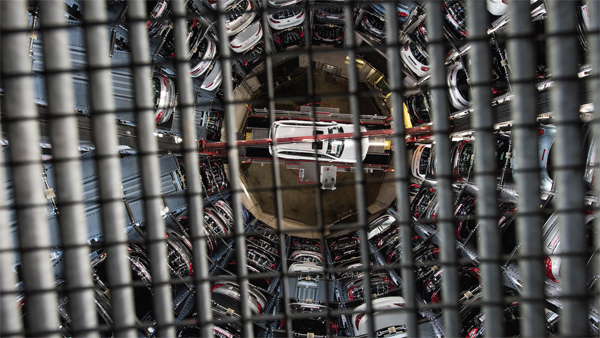 The case for APS gains even more traction as space becomes more of a premium in towns and cities. In the US, it is estimated that surface car parks take up around 4,700 square miles of land – that’s roughly about the same size of Jamaica or Qatar. Clearly, land is plentiful in much of the US, however, in Europe, Japan and in US cities like New York and Boston, where land is at a premium, maximising every last piece of inner city land is vital.

Alongside the environmental and planning considerations, APS also offers ancillary benefits such as security – an attractive offering for drivers in urban environments. Today, the perception of risk is matched by the statistics – according to the Home Office, around 20% of all car crimes take place in car parks. With APS offering the equivalent of automated valet parking experience, there is an added assurance.

Indeed, a whole range of factors are coming together to make the case for alternatives such as APS more compelling than ever. Why then is it that automated parking has so far struggled to deliver on its potential, and not been more widely adopted in the UK’s towns and cities?

Why hasn’t APS taken off?

Perhaps the obvious answer is that it’s comparatively expensive. There’s no denying that capital outlay costs can be high when compared to other parking solutions. However, when you consider that less space taken on carparking allows for greater returns elsewhere, for example, more residential units – then the higher initial costs can be easily offset or even used to drive a higher overall return.

Aside from the financial barrier there is also the issue of consumer acceptance and the argument that people are simply not yet used to or ready for this kind of technology. Here too, we may be reaching a tipping point as smarter technology and automation comes to permeate every aspect of society – with motoring no exception.

While the tide is turning, this trust will still take some time to build and it is important to acknowledge that APS set backs in recent years have somewhat dented consumer confidence.

Both here in the UK and overseas automated parking systems have been plagued by problems such as cars taking far too long to be retrieved, the wrong cars being returned, trapped vehicles, with some systems even reportedly causing damage. It’s disheartening to hear about these failed projects, as it doesn’t help with what should be a relatively straightforward argument in favour of APS.

The frustrating part is that the technology is there; it’s just not always been adopted in the correct way. The key thing to note is that there are a range of approaches and differing design philosophies and there are successful and reliable systems in operation – those that deploy appropriate technologies and that are fit for purpose.

Designs for APS do differ, but most consist of a combination of automated ramps, slabs, lifts and shelves, using a computerised system that parks and delivers a car like a high-tech vending machine. Yet beyond this approach is an alternative option which sidesteps many of the issues plaguing APS in the past, and which offers real cause for excitement that APS is more than fit to help take on the challenges of today’s urban environments.

A very different approach to the technology behind APS is the use of a conveyor belt system, which has already proved hugely successful across Europe and is now being specified in a number of high profile UK projects. Combining world class engineering with cutting-edge software, the conveyor belt APS is the first and only automated robotic parking system in the UK that actually works.

The advantages of roller conveyor belt systems for automated parking applications come from their simplicity and efficiency. Without wasted motions and movement, conveyor belt systems tend to be much faster than other types of transport technologies used in APS. They also tend to utilise common off-the-shelf components, which leads to increased reliability, durability and parts availability as well as lower costs and inventory.

APS isn’t there yet but, as several projects in the UK with an APS at their heart have been given the green light, I think we have reached a tipping point. The time has come for this technology.