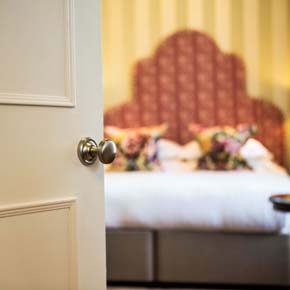 Video of the Week: Extensive refurb and paintwork at Bovey Castle

Bovey Castle is set across 275 acres of countryside in the heart of Dartmoor National park. First opened in 1930 by Great Western Railways, the castle became part of the Eden Hotel Collection in June 2014.

The refurbishment programme included the creation of 22 ensuite rooms, featuring a colour scheme designed to offer a “subtle, restful style”.

The Palladian scheme, one of eight styles from the Crown Trade Historic Colours Collection, was chosen as part of the application of Crown Trade Clean Extreme Scrubbable Matt to combine authentic shades with a easy to maintain, scrubbable formulation.

Crown Trade Clean Extreme Scrubbable Matt which was applied to the ceilings in the bedrooms as part of the east wing refurbishment programme, in addition to walls and ceilings in the ensuite bathrooms, which have all been finished with marble tiling and granite detailing.

For wooden surfaces within the bedrooms and ensuite areas, Crown Trade Acrylic Eggshell has been used. The work was completed over a 14-week timeframe by John Stedeford & Sons of Aston, Birmingham.

Deborah Orr, Marketing Manager of Crown Paints’ Trade brands, commented: “Crown Trade Clean Extreme Scrubbable Matt is the ideal choice for prestigious, luxury locations such as Bovey Castle as it allows surfaces to be returned to their pristine condition time and time again without burnishing its flat, chalky finish, which is the hallmark of historical paints.

It really proves its worth in heavy traffic areas such as hotel rooms and corridors due to the fact cleaning and maintenance teams can quickly restore the surfaces back to their pristine condition.”