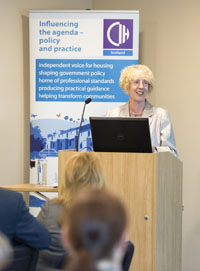 CMS recently hosted over 70 Scottish social housing leaders at the CMS Innovation Hub to debate how the latest building technology can be deployed to meet government targets to cut fuel poverty.

The CIH was keen to discuss the introduction of the Energy Efficiency Standards for Social Housing (EESSH) and the Regulation for Energy Efficiency in Private Sector Housing (REEPS) – and the practical steps that can be taken to alleviate fuel poverty.

In the same month, the CIH held its national conference and exhibition in Manchester at which CMS exhibited for the first time.

The exhibit was designed to inform senior decision makers and influencers of the possibilities for external envelop design and improvement.

CMS is working towards helping housing providers to deliver safer and more secure homes to their tenants. Aesthetics, comfort and energy efficiency have also been targeted for improvement.

Walking with the Wounded

During the exhibition, CMS pledged to support a new project which aims to transform the lives of war veterans and their families.

The company will collaborate with Kier, Manchester City Council and several charities on a major housing regeneration project to provide much-needed homes for veterans.

This will be filmed by BBC DIY SOS and aired later this year.

CMS will manufacture and install windows as part of the project, which will renovate seven deteriorated homes, to create three adapted homes for veterans and their families, as well as a Walking With The Wounded’ advice and therapy centre.