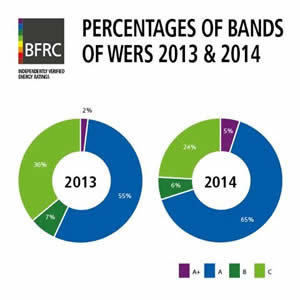 After being launched in 2013, ‘A ‘ rated windows doubled during 2014 as a percentage of the total number of rated product. By the end of the year, the figure stood at nearly 5%.

Meanwhile, the market share of ‘A’ rated windows continued to increase from 58% – 65% throughout the year.

A decline in inefficiency

The percentages support BFRC’s argument that window energy ratings have moved the industry.

The products manufactured and installed are climbing further and further up the energy efficiency ratings bands.

The company is eager to see how the first ‘A ; rated windows will affect the figures further. These are predicted to hit the market within the next few months.