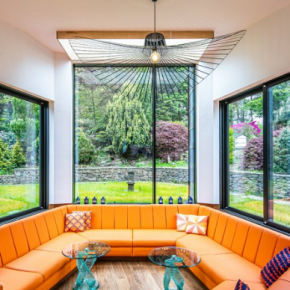 The 1970s were a revolutionary period of acceptance and moving forward as a society, with many important social movements being founded in this decorated time. Along with this, the 70s also had a huge influence on the interior and exterior of buildings all over the world. 70s vogue has also had a heavy effect on modern interior and exterior design. Ranging from complex designs of wallpapers, to simple yet effective patterns on rugs, retro designs are becoming more and more popular in present times.

The original house, built in 1967, adopted a mid-century American exterior; with large windows looking out at the surrounding gardens that were framed by wide eaves and a low-profile roof. Taking inspiration from Frank Lloyd Wright, and other famous Architects from the mid-20th century, the house showcases a real ‘wow factor’. As conversations with the homeowner quickly progressed it became apparent how special this home truly was.

The project was separated into three parts. Two stock sized Flushglaze Fixed Rooflights were the first port of call for the homeowner and the architect. It was imperative that any changes made to the original exterior of the house did not impact the simplicity of the roof lines, therefore the Fixed Flushglaze Rooflights were selected.

The double pitched roof meant that it was not possible to set the rooflight into the roof pane without compromising the water-proof integrity of the roofing. However, the Flushglaze’s simple frame means that although they sit proud of the roof, they remain visually unobtrusive.

The standard Flushglaze Fixed Rooflight is a very popular item in our wide range of products, with a minimum span and width of 400mm and ranging to 4200mm subject to area m2 limitations.

In this case, the Flushglaze Fixed Rooflights were both 1200mmx 900mm. With a frame colour of RAL 7015 (Slate Grey), they bring a simple yet highly effective essence to the property. Deciding to purchase a stock size Rooflight, rather than a bespoke size can be a much more cost-effective option.

The second part involved a singular stock sized Pitchglaze Roof Window. Adopting our pioneering ‘frameless’ design ethos, once installed, this product provides the building occupants sky only views through the aperture, something not usually found with a traditional roof window without requiring an upstand.

As a roof window it is UKCA and CE marked and designed to be installed in pitched tiled roof applications flush with the tiling line and to be used at roof pitches between 15° and 60° and comprising of Qualicoat approved polyester powder coated aluminium framework.

The Pitchglaze can also be supplied in either landscape or portrait orientations. In this case, the Roof window sat at a 22° angle with “vision area” dimensions 1000mm x 3000mm.

The third part of the project consisted of a solitary Triple Glazed Flushglaze Rooflight, with three Wall Abutments. The homeowner opted to go “made to order” for this luxurious item, with a span of 1205mm x 2825mm.

The Wall Abutment detail is part of the Flushglaze framework and is secured using suitable fixings, that depend on the structure being used. The Flushglaze range of Rooflights have been independently performance tested and approved by the British Board of Agrément (BBA) and are also classified by The Official Police security initiative, Secured by Design and tested to LPS2081/1 with certification by the Loss Prevention Certification Board.

This helps to enhance resistance to opportunist intruders attempting ‘stealth’ attacks to gain entry, which are often carried out in residential areas.

Terry Huggett remarked: ‘For me, this project is simply a once in a lifetime opportunity and I enjoyed every minute of it’

The project brings with it a unique element of family. With the homeowner inheriting the house from his parents – Terry Huggett cites that his love for mid-century American architecture stemmed from family holidays to places like California, and other cities and states in western America.

This connection with the project for both Architect and Contractor, along with their personal chemistry is obvious, as is the care and precision of the build exhibited everywhere within the residence.

The home also boasts many different structural qualities that distinguish it from other houses up and down the country. From a heated driveway to a Borehole that provides ‘Evian quality’ water from tap, the home showcases many unique and desired aspects.

Overall, the project took approximately three years to be completed. Now, Ravine House is gaining publicity up and down the country and has been nominated for various RIBA awards. It is visually clear that the home is something truly special that simply defines quality and displays an incredibly high level of Architectural and Contractual ability.

To read about a Glazing Vision Flushglaze Eaves Rooflight featuring in a London project, click here.