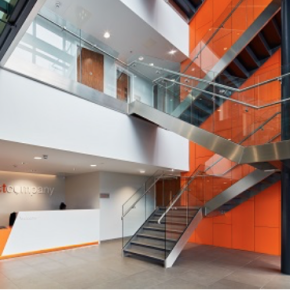 Armstrong has supplied ceiling and wall systems for the award-winning Grade A Kingsgate office building at Birkenhead in Wirral Waters.

Designed by Falconer Chester Hall Architects, Kingsgate is one of the first flagship schemes to be constructed within the 500-acre Wirral Waters regeneration project, located on the side of the River Mersey at Liverpool’s famous docklands. 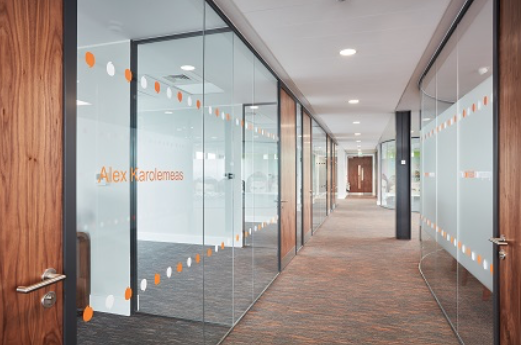 Made up of 64 per cent recycled content, the Ultima+ range can be specified in three core densities – allowing specifiers to engineer sound absorption and attenuation for optimum acoustic performance.

The system’s were specified to reduce acoustics in the open plan office areas and main atrium. Stephen Fieldsend of Falconer Chester Hall said: “We have worked with Armstrong continually on office developments. On this one particularly the Armstrong materials interface fantastically well with the other materials used on the project. We had continual help from Armstrong for the visual aesthetics to the main atrium space.”

The 5,000m2 building features a unique design concept that reference Liverpool’s history, and the trading vessels that once negotiated the waters on its doorstep. However, the primary focus of the development was geared towards sustainability.

Armstrong’s Ultima+ tiles emphasise the building’s use of natural light by providing a bright smooth surface that gives 87 per cent light reflectance which, in accordance with the Brinjac Engineering Study 2006, helps to achieve 16 per cent cost savings compared with indirect lighting.

Built on former dockland, Kingsgate was constructed in less than a year by Eric Wright Construction, on budget and two weeks ahead of schedule. The building’s ceiling and wall systems were installed over three months by a team of eight sub-contractors from CLM Drylining.