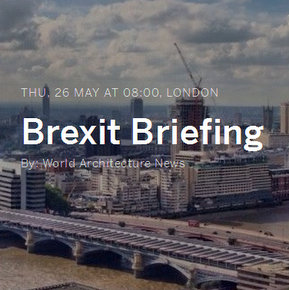 Buildingtalk will be at the Brexit Briefing being held during at Clerkenwell Design Week to assess what the impact Brexit would have on the UK construction industry.

UK Construction Week and World Architecture News will bring industry leaders together to examine the impact a Brexit would have on the industry.

Buildingtalk, a media partner with UK Construction Week, will be reporting from this key Brexit Briefing to be held on Thursday 26th May at Grimshaw Architects offices during Clerkenwell Design Week (24 -26 May). 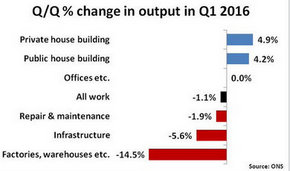 Construction data from the Office for National Statistics has added to evidence that Brexit uncertainty is putting business activity on hold. A sharp fall in construction output in March means that the sector contracted by 1.1% in the first quarter overall.

Last month, when the ONS published its first estimate of Q1 growth (0.4%), it pencilled in a smaller drop in construction output of 0.9%. That was before it had the data for March.

In the first quarter, all new building work fell by 0.6%, while repair and maintenance dropped 1.9%.

House building was the bright spot, growing by 4.8% in the first quarter. Infrastructure fell 5.6%.

IMF and Bank of England warning on Brexit

The stark warning, from Christine Lagarde, IMF managing director, was coupled with analysis that found a vote to remain in the EU would spur a rebound in growth in the second half of the year, bringing to an end more than a year of stagnant output and falling business confidence.

Phillip Inman, economics correspondent at The Guardian reported on the International Monetary Fund warning of a stock market crash and steep fall in house prices that could follow a vote to leave the EU. A panic among investors about the future path of the UK economy would trigger shockwaves throughout the economy.

Samuel Tombs, Pantheon Macroeconomics chief UK economist (quoted in The Mail) said ‘The latest construction figures provide yet more evidence that uncertainty about the outcome of the EU referendum is slowing the economic recovery.’

Chancellor George Osborne warned that global market reaction to a Leave vote in the June 23 referendum is likely to be ‘negative and could be severe’.

Howard Archer, IHS Global Insight economist, said construction output had ‘nosedived in March’ and had been affected by increased caution among clients amid heightened UK economic uncertainties, that are being magnified as June’s EU referendum looms. However, if the referendum results in a vote to stay in the EU, the construction sector, the reduced uncertainty would cause delayed projects to kick in.

Have your say on Brexit

We will be reporting the outcome of next week’s Brexit Briefing. Do add your comments below, especially any insights you have into the potential Brexit affect on your sector of the construction industry.