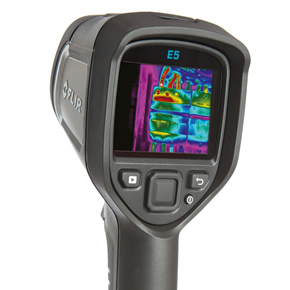 FLIR offers a range of thermal imaging cameras: whilst its Exx-Series has been designed for professional thermographers, its Ex-Series features entry level models.

The technology also enables quick target orientation and the creation of clean reports; users are able to easily identify and define problems from the thermal image produced

FLIR’s Exx-Series offers greater functionality, with resolutions of up to 320 x 240 pixels. This range is supplemented with a variety of interchangeable lenses: users can switch to wide angle, in order to capture more of a scene in one shot, or utilise the telephoto lens to measure distant and smaller targets.

Better suited to professional thermographers, the FLIR Exx- features a touchscreen and manual focus, as well as MSX technology.